Royal Jordanian's shares remained stable on Thursday (29-Jul-2010). On the same day, the carrier released its financial/traffic highlights for the 12 months ended Jun-2010 with a 13.9% year-on-year rise in revenue to USD441.8 million and a net loss of USD10.2 million, compared to a net profit of USD10.9 million in the previous corresponding period.

Fly540 also announced its first flight from its Angolan hub is scheduled for 15-Aug-2010. The company commented: "Whilst being delayed from the company's planned start date, this flight will represent a step change in the trajectory of the Fly540 network into a domestic and regional market that is seeing an economic boom and is chronically underserviced presently.” 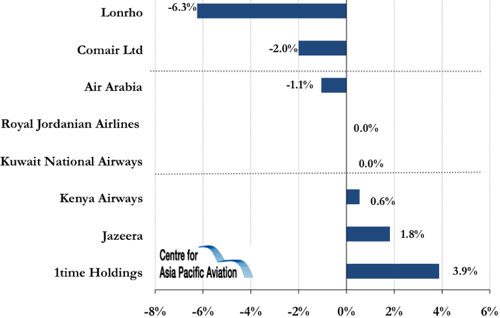