Royal Jordanian (+0.5%) and Arab Bank have launched a co-branded visa card in Bahrain, enabling cardholders to earn and redeem points against purchases against free tickets and upgrades to Crown (new First/Business) class, under RJ's Royal Plus frequent flyer programme.

The carrier stated the partnership would raise the bank customers’ awareness about RJ's frequent flyer program and the advantages granted its members.

Elsewhere, Kuwait National Airways' shares were flat. The carrier’s subsidiary, Wataniya Airways, celebrated its first year of operations to Bahrain on the weekend, and stated the airline will introduce an additional three A320 aircraft into service in 2010. The carrier currently operates a fleet of four A320s. 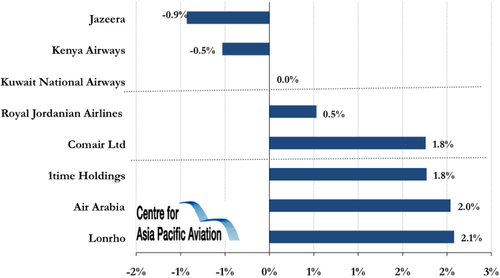