Kuwait National Airways ended trading flat. Subsidiary, Wataniya Airways announced during trading that it plans to launch three times weekly Kuwait-Vienna service on 02-Jun-2010, with Vienna to become the carrier's third European destinations, after Istanbul and Rome (to be launched on 02-May-2010 and 31-May-2010, respectively) and the carrier's 11th destination in its network.

Jazeera up on capital raising

Jazeera Airways (+4.1%) gained following news the day prior that its Board of Directors approved plans to raise capital by 91%, to KWD42 million, through a rights issue. On Monday, the carrier also announced plans to launch three times weekly Kuwait-Lahore service from 12-May-2010. Lahore is the carrier's first destination in Pakistan.

In Africa, Nigerian Eagle Airlines (formerly Virgin Nigeria), currently 49% owned by Virgin Atlantic, reportedly plans to sell equity and reorganise its debt in a transaction worth approximately USD450 million, according to the airline's advisors, Ernst & Young. The agreement is expected to be completed by the end of Summer 2010. A number of investors and companies have reportedly shown interest in acquiring the stake, all of which are based in Nigeria. The airline is also trying to sell the seven EMB-190s it has on order.

Elsewhere, 1time Holding (-4.3%) and Comair (-1.5%) were both down again on Monday, for a second and third session, respectively, moving lower with South Africa’s JSE Index, which was down 0.5%. Kenya Airways and Lonrho were both flat, as Kenya’s All-Share Index fell (-0.2%). 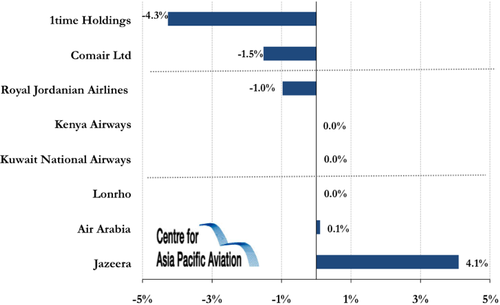