Royal Jordanian (-1.0%) declined on Tuesday (02-Mar-2010). The carrier announced during trading that it has signed an MoU with USAID/Jordan Tourism Development Project II (Siyaha II), agreeing to cooperate in setting up an environmental management plan (EMP) for RJ.

In the first phase, Siyaha II will collect and analyse available data and information regarding RJ operations, while Phase II will then entail consultations with RJ, the Ministry of Environment, the Civil Aviation Regulatory Commission and other relevant parties regarding the EMP and compliance requirements for RJ.

Elsewhere in the Middle East, Kuwait National Airways (-1.8%) was also down, despite a 0.4% rise in Kuwait’s share index on its first day of trading after a five day national holiday. On the other hand, Jazeera Airways (+0.9%) was up, while Air Arabia (-1.0%) fell.

Other African carriers performed slightly better, with Fly540 owner, Lonrho (+2.1%) ended trading up. Comair and 1time were flat, as South Africa’s All Share Index (+1.3%) climbed for a third consecutive day. 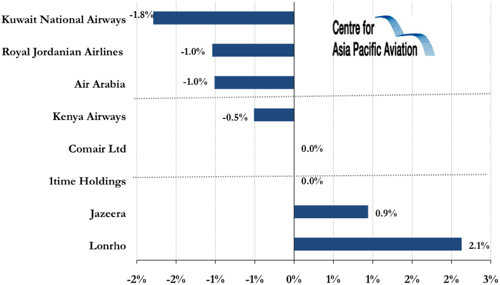