Rockwell Collins issued a revised outlook for FY2009 and FY2010, lowering and narrowing its forecasts for earnings per share this year from USD3.70-USD3.90 to USD3.70-USD3.75, and cutting its revenue forecast by approximately USD50 million to USD4.5 billion.

Government Systems revenue is expected to increase by approximately 12%, with around half from organic growth and half from the recently acquisition of DataPath.

Rockwell Collins expects to invest USD870-900 million in R&D costs, and approximately USD135 million in capital costs. Shares in the company were down 0.8% on Monday.

EADS shares lost 5.0% on Monday, despite Morgan Stanley upgrading the manufacturer from ‘equalweight’ to ‘overweight’, citing long-term airline capacity intentions of airlines and renewed confidence in aerospace companies that the worst of the economic crisis is over.

US lawmakers have continued to lobby the Obama Administration to exclude the EADS/Northrop Grumman entry from the USD35 billion US aerial refueling contract, due to be reopened in the next few weeks. 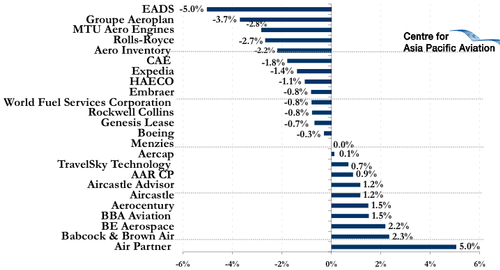