The financial prospects for airlines for 2010 are for more red ink - although considerably less than 2008 and 2009, according to IATA's latest financial forecast. The industry trade body has predicted combined airline losses of USD3.8 billion in 2010, and has revised its 2009 loss forecast from USD9 billion to USD11 billion.

Part of this is the underlying weakness in passenger demand, and the attendant falls in yields. But, the increasing price of oil, as global economies pick up, provides yet another considerable cause for concern for the fragile industry.

Even with the large drop off in fuel prices seen since the second half of 2008, airline fuel bills this year will still be greater than they were over the first three years of the decade, combined.

IATA expects the price of crude oil (Brent) to increase from an average of USD61 per barrel this year, to USD72 per barrel in 2010, “further squeezing airline operating cash flows”.

Furthermore, the crack spread is expected to return to normal levels again in 2009, driving aviation jet fuel from USD72 per barrel this year to a forecast USD82 per barrel in 2010.

Oil back above USD70 per barrel 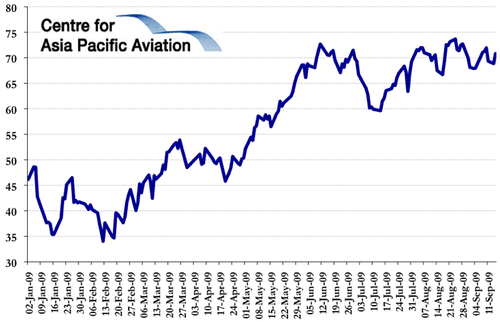 Jet fuel prices have retreated slightly, with Amsterdam-Rotterdam-Antwerp exchange prices down 1.3%, Singapore falling 0.5% and Los Angeles prices falling 0.2%.  New York Harbor was up 0.8% and US Gulf Coast up 1.0%. 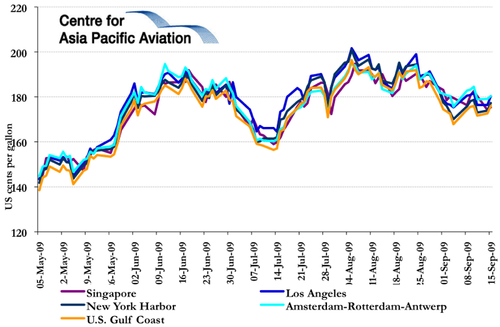