Revolving doors at European airlines: Is it becoming a pandemic?

As the 2009/10 football season reaches its turning point, many managers of less successful teams are looking over their shoulders as dissatisfied owners seek scapegoats and hope that fresh blood will restore their teams’ fortunes. For airlines, approaching the end of a long hard couple of seasons, managers are also in the firing line. But some of the moves in their cases are voluntary, either for lack of team commitment or of board support – or simply because change creates change.

In the case of older airlines, they are often stuck firmly between recalcitrant unions and the realities of the need to adapt. Finnair is one of these; the outgoing manager/CEO is however not leaving in disgrace, but rather out of frustration at his “team’s” unwillingness to accept the new reality. Aer Lingus is not greatly different.

The easyJet case is quite different and less common in the airline business: conflict not of management with unions but with the company’s substantial owner. The past couple of months have witnessed an acceleration of departures (and arrivals), perhaps presaging more to come in 2010;

Current Chief Executive Officer, Jukka Hienonen, announced his resignation in Aug-2009, due to his frustration at not being able to gain the necessary concessions from the airline’s unions, as he struggled to contain costs. Saying he was “not satisfied” with the way union leadership had responded to the realities of the recession, he believed “a clear change of course” was needed.

The 48 year-old Vehviläinen joined Nokia in 1991 and is currently Chief Operating Officer of Nokia Siemens Networks. He has strong experience in sales and marketing and of strategic management and business development in Asia, North America and Europe. He will need not only strategic skills, but also the savvy and patience to deal with an increasingly unhappy workforce, which realises that staff reductions and rationalisation are inevitable, but doesn’t want them to happen.

Finnair pilots went on strike last month and ground handlers, opposing cuts and relocation of services, have this month already seriously disrupted a substantial part of the airline’s Helsinki operations. Reinventing the airline looks like being a tough fight as current the CEO, Jukka Hienonen, and his board take an uncompromising attitude to what needs to be done. It is not helpful for business when the carrier is forced to warn its full service passengers that they will have to provide their own service: The carrier’s website this month: “Finnair passengers are advised to avoid taking baggage that needs to be checked in if possible, as the effects of illegal action by baggage-handlers at Helsinki airport continues for a fourth day. The use of internet and self service check-in kiosks is also recommended. Finnair advises passengers to arrive early at the airport, and are advised that catering on flights may differ from normal due to the walkout.”

Hienonen has warned that Finnair is facing a EUR200 million loss for the full year. At least that offers some hope for improvement under his successor in 2010 – but only if the cost reduction programme can be sustained.

The model under attack

Finnair has run into heavy weather recently. Last year it suffered worse than most, as fuel prices rose, its thirsty MD-11s making breakeven on long haul routes difficult. Although its model, gathering European traffic over its very strategically placed longhaul hub, still works in principle, the past year’s fierce price competition on both longhaul and intra-European services –where low cost competition increased - has forced the airline to cut back drastically in order to stem the bleeding. But downsizing has to be done with care, as losing feeder routes quickly causes deterioration across the system.

One recent change in strategy has been to attack the north Atlantic market, actually increasing capacity there, while contracting on other longhaul sections.

Under its previous two leaders, Finnair, with a home population not much bigger than Singapore’s, has managed to develop a similar sixth freedom system to the island state’s. This has in turn delivered Finns a higher frequency of short haul service than would otherwise have been the case, as intra-European flights fed the long haul sectors. Now however there are alternatives aplenty willing to replace Finnair on shorthaul, although the additional transfer traffic would be lost if the network system collapsed. For the time being however, the price of collecting and distributing it is becoming prohibitively high.

The revenue and income slump

A combination of service reductions and yield dilution sees its revenue down 21.8% year on year in the third quarter of this year. Things might be stabilising, but it is a long way back to a profitable operation. 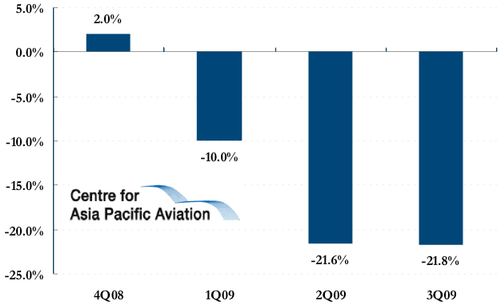 The topline reduction is also passing all the way down, with both operating and net profit margins down significantly over the past five quarters. 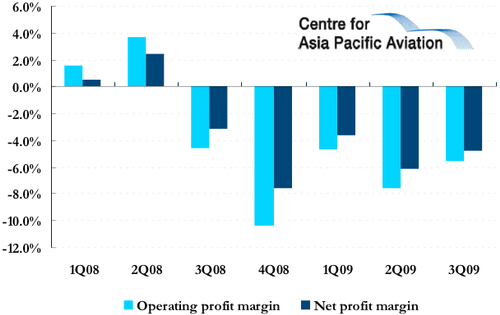 Vehviläinen says a turnaround will require “goal-directed development of the business practices. It will be necessary to improve competitiveness, and management and personnel will have to cooperate closely in this task”, he says.

They have not shown much inclination to do so to date. 2010 is going to be crunch time for Finnair, its creaky 55.8% government owned 86 year-old frame groaning under the weight of a new operating environment. As Hienonen said at the time of his departure announcement, “Many structures, as well as the company’s culture, have been formed in totally different conditions. With these we cannot do well in the present competitive environment, but changing has proved to be extremely difficult. Some personnel organizations have shown no willingness to adapt.”

Tantalisingly for Finnair (but not for its management, charged with turning it around) market exit is often one of the toughest hurdles for flag carriers. Governments are easily persuaded to cave in rather than face the wrath of powerful unions, and the short term flow-on economic impact of withdrawing an established airline’s activity can be substantial, even though, these days, the gap is in reality quickly filled.

Already this year, overweight and outdated Air Canada and Japan Airlines have been bailed out by their governments – even though each is a publicly listed entity. Presumably these bad examples will be well known to Finnair’s unions. Whether Finnair is actually too-big-to-fail is perhaps not so obvious though. There are alternative airlines now in the north capable of quickly filling any void the Finnish flag carrier might leave.

Mr Vehviläinen’s resourcefulness will be tested to the full; he will need considerable fortitude from his government too, if the airline’s employees are to be asked for even greater sacrifices.

On 9-Dec-2009, Andy Harrison, CEO of easyJet handed in his resignation, effective Jun-2010. He is only the second CEO the airline has had. The airline was quick to emphasise that his departure was specifically not connected with this year’s board challenges to his leadership strategy.

Unlike Finnair, easyJet, with a very different culture, has been performing profitably and continuing to expand in these difficult circumstances. The airline’s main difficulties appear to have been rowdy differences between its founder and substantial shareholder, Sir Stelios Haji-Ioannou and the airline’s board and management over the appropriate rate of expansion for the carrier. Sir Stelios and his family still hold some 38% of the airline’s equity.

But the outcome for the airline is not a happy one either. Strikes and restructuring of the airline are not the issue. Yet finding a new CEO, who can at the same time handle a vocal large shareholder, guide an appropriate strategy and still keep the airline profitable, will be a challenge.

There has been a revolving door at easyJet in the past year, as the boardroom shenanigans have disrupted harmony.

CEO Harrison had been given “golden handcuffs” (a “retention agreement”) by the interim chairman Chairman after previous chair, Sir Colin Chandler, prematurely chose to step down as chairman in Apr-2009. His permanent replacement was Sir Michael Rake, chairman of BT. At the time, Sir Colin let it be known that he was “fed up” with the rows in the boardroom. And Finance Director Jeff Carr, went off to join FirstGroup,

Harrison committed to stay for 12 months, as the interim chairman clarified that “I felt that having lost Jeff and Colin, we needed to make sure that Andy was not going anywhere…It was an insurance policy that cost a bit of money” – in the form of a substantial bonus that the CEO will receive for seeing out the year.

Finding a successor won’t be easy

The next six months will give easyJet a decent period to find the next CEO. As Mr Harrison said, “I am looking forward to being part of the process of selecting my successor and am committed to ensuring a smooth transition.” He had “loved being a part of easyJet’s success, but (is) now looking forward to moving on to a new challenge.”

One of Europe’s most successful airlines, easyJet has a large order book and will be more or less forced to add capacity to its fleet next year, so more conflict may be on the cards, unless there is a strong uptick in the economy. Though the job should be one of the industry’s plums, here too, like Finnair, the incoming CEO will have more than airline-specific strategic decisions to make.

(3) A terse departure at Aer Lingus, as the CFO leaves at short notice

Aer Lingus is also all too familiar with the revolving door process, after a turbulent and highly unsuccessful year financially.

CFO and head of short haul, Sean Coyle, resigned on 9-Dec-2009, effective 31-Dec-2009. The company’s statement said, "Mr Coyle will leave Aer Lingus by mutual agreement at the end of December 2009 to pursue other interests, He will also resign his position as a member of the Aer Lingus board."

Chairman Colm Barrington was somewhat muted in his praise: “Sean has made a significant contribution to Aer Lingus since joining the airline in August 2008 particularly within the context of the Transformation Plan. We wish him well in his future career.”

And Mr Coyle said only that he “would like to thank the Board and my colleagues for their assistance and support during my time with the company. I would like to wish Aer Lingus every success in the future," read the statement.

Coyle’s departure follows quickly on the heels of newly arrived CEO, Christoph Mueller. The former aviation director at TUI Travel, Mr Mueller is pushing for 676 voluntary redundancies across the company, to cut labour costs by EUR74 million, to help stabilise its operations. The airline has also applied for a UK Air Operator’s Certificate that would allow it to operate from London Gatwick and Belfast, shifting operations away from Dublin. Unions are unhappy with the moves and negotiations remain tense, with a very real threat of industrial action.

The search for a replacement CFO is already under way. With the part-government owned Irish flag carrier in the throes of a battle with its other large shareholder and major competitor, Ryanair, sandwiched between vociferous unions opposed to the transformation plan, intricacies abound.

One of the toughest years on record for European aviation has placed intense pressure on airline boards, executives and workers – with the inevitable fissures occurring. Boardroom splits over stategy and/or frustration with organised labour groups over the pace of reform has led to the demise of several high profile executives from airlines across the continent this year.

With at least the early stages of 2010 looking to be just as taxing on airlines, more executive churn is probable. Flexibility and the ability to respond quickly to volatile conditions will be crucial again for European airlines next year – and much will rest on finding the leaders that can inspire and implement change.