Revenue reductions for Air Berlin in May-2010; Cimber Sterling’s yields slump in Apr-2010

Airline shares declined in Europe on Monday, in line with the broader market.

Among the European LCCs, the Scandinavians were the hardest hit, with shares in Cimber Sterling slipping 4.9% yesterday, as the carrier reported a jaw-dropping 48% reduction in yield to DKK0.95 (EUR12.77 cents) in Apr-2010. The yield reduction was due to “intensified” competition and increased price pressure on domestic operations. Domestic yields declined by 35%, with a 21% reduction in regional yields and a 5% yield improvement in the leisure segment. The carrier also stated a changed product mix with increased leisure production and the closure of airspace during the month contributed to the reductions.

Meanwhile, shares in Norwegian Air Shuttle slipped 4.8% yesterday, following a 3.3% gain on Friday. The carrier, on Friday, reported a 14% year-on-year reduction in yields and unit revenues in May-2010, to NOK0.51 (EUR6.44 cents) and NOK0.39 (EUR4.92 cents), respectively.  The LCC commented that the yield developments reflects an adjusted route portfolio with 5% longer sector length and the introduction of 12 new B737-800 aircraft with higher capacity and lower unit costs since May-2009.

Also reporting May-2010 traffic results yesterday was Air Berlin, Germany's second largest airline. The LCC reported a 6.9% year-on-year revenue per ASK reduction in the month to EUR5.48 cents, with the result affected by a number of cancellations as a result of the volcanic ash cloud and “reluctant booking behaviour” thereafter. Also during the month, the carrier reported a 1.8% increase in passenger numbers to 2.9 million.

The German Government is planning to impose an air travel tax under a four-year austerity plan to reduce its budget deficit. The levy is expected to produce EUR1 billion p/a in revenue, with the tax to be paid by passengers departing domestic German airports. The level of the tax will be dependent on factors including the flight’s noise pollution and fuel consumption. The government expects the tax to generate EUR1 billion p/a in revenue. The levy will be replaced by a Europe-wide measure once the European Union’s carbon-emissions trading scheme is launched in 2012.

Among the UK-based LCCs, shares in Ryanair gained 0.9%, while easyJet slipped 1.7%. 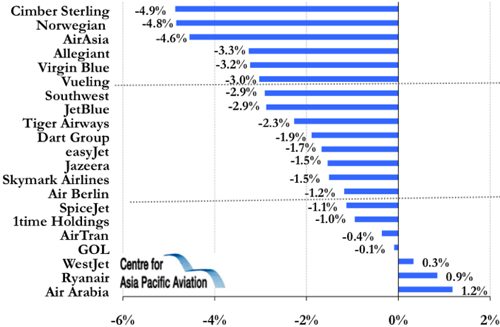