With the changes in regional capacity purchase agreements wrought by the mid-decade mainline bankruptcies as well as the almost complete halt to regional airline growth rates resulting from the recession, it was clear that regionals had to do something to expand their prospects for the future.

Republic’s gamble of entering the low-cost arena may not be paying off, since it announced a USD100-million-cost-cutting initiative at its annual meeting last week to compensate for the fact it is paying 75 cents more for fuel than anticipated by the USD2.75 per gallon price set in its 2011 business plan.

In a management letter to employees, the company said it has hired a restructuring firm to “stress-test” a restructuring plan for Frontier to determine whether it can bring Frontier losses under control and position the company for the long term. It is considering raising USD75 million with an additional equity offering, according to Dahlman Rose Analyst Helane Becker, who reported on the company in a recent research note.

“At the current share price of USD4.88, an additional equity raise of USD75 million would imply additional shares of ~15.4 million,” she wrote. “We view this as a negative given the previous equity raise at USD7.80, which already significantly diluted shareholders and which is still underwater.” 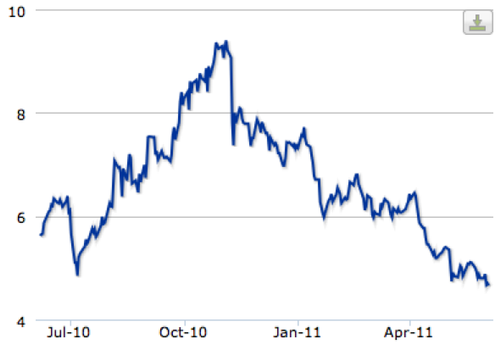 Even so, Ms Becker is banking on its the predictability of the USD48 million in net earnings from its CPA business to maintain its Hold rating for the company. Its Frontier and fuel headwinds are actually compounded by the fact that two of its five subsidiaries – Chautauqua and Shuttle America – are Delta Connection carriers with the consequent pressure on costs, as has been experienced at all Delta Connections.

It is dissolving a third subsidiary, Lynx Aviation, once a feeder for Frontier and still has responsibility for the Q400s the company ordered before its bankruptcy.  One would have thought that might have been part of the deal to get Republic as lead US customer for the CSeries.

It is also in the middle of the United/Continental merger with Chautauqua flying for Continental and Shuttle America flying for United. Delta, too, is continuing a similar reconciliation with its regionals and its American agreement expires in September.

The company cited the need for USD80 million to USD100 million in cost cuts during its first quarter earnings call. However, Ms Becker does not think the company can find sufficient cuts especially given its obligation to provide salary increases this year.

“Management is capitalizing on opportunities for the fixed-fee operation to offset losses at the branded operation due to the rising cost of jet fuel,” she wrote, noting Frontier’s USD51.2 million pre-tax loss in the first quarter and its failure to produce a profit since acquisition. “We forecast 2011 EPS of (24 cents), down from our prior estimate of 90 cents. Our preliminary 2012 estimate is 70 cents. We believe Republic will continue to de-emphasize its branded operations with oil prices over USD110/barrel.”

The carrier said it is reconsidering its order book which includes Embraer 190s, Bombardier CSeries and Airbus A320s. The Embraers are on firm order but the rest are tentative, according to the Indianapolis Star which attended the company’s annual meeting last week. The airline tipped that it is considering the Airbus A320neo, during its last earnings call, likely an indication of Airbus’ aggressive move against the CSeries.

Of all the regionals, Republic took the greatest gamble, one that has spelled doom for the other regionals that preceded it into the low-cost arena. First there was Independence Air, formerly a United Express/Delta Connection regional known as Atlantic Coast, whose CPA business was felled by the United and Delta bankruptcies and the failure to reach a new post-bankruptcy agreement with United. Next it was ExpressJet that instituted a point-to-point network that was killed by the run up in fuel costs in 2008/09.

Republic jumped on the opportunity to capitalise on two failing low-cost carriers to acquire first Midwest Airlines and then Frontier, merging the two last year. The early confidence after the acquisition has since been replaced by increasing concern over the merged operation, largely on the price of fuel which has changed significantly since Republic began investing in Frontier and Midwest.

During its recent earnings call, the company reported Milwaukee  capacity was decelerating rapidly and now expected to be flat to up 1% in 2Q and decline 4-6% in the third quarter. Same store capacity in that market will fall 2-3% in the second quarter and fall faster in 3Q by 3-5%. For the full year, capacity at Milwaukee will be down 15-20% compared with 2010.

In December 2009, Republic Airways CEO Bryan Bedford noted the cost advantage the carrier had at Denver against both Southwest and United. But that has not been mentioned since then and probably has been whittled away. 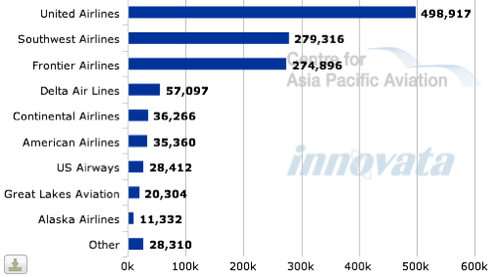 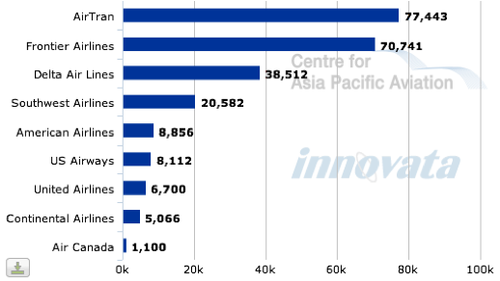 Frontier is contracting or holding steady its ASMs with its fleet strategy of moving EMB 170s out of Frontier and into Delta Connection flying resulting in the loss of 16 lines of flying.

MIT Research Engineer Bill Swelbar has baldly predicted there is no room for three carriers at DEN, despite Frontier’s protestations that Southwest’s market-share increase is coming out of United. Frontier said it is focussing more on profitability than market share but so, too, is the rest of the industry so it is doubtful this is of much comfort, especially since Mr Swelbar suggests that Frontier must maintain a high market share there if it is to survive over the long term.

A recent USD3 boost in fares by Frontier was rescinded, indicating its lack of pricing power, especially critical in a rising fuel environment. Mr. Swelbar indicated that Southwest has the time and financial wherewithal to overcome Frontier’s cult following at Denver. In addition, he said Frontier has limited financial resources to enable aggressive growth. That means Frontier and Southwest are head to head for local demand and Southwest has the deeper pockets.

“My guess is something is going to give in Denver because at some point the law of diminishing returns is sure to play out for any one of the three competitors,” Mr Swelbar told CAPA.

All things considered, Frontier and its CPA operations bear watching in the wake of the mergers and volatile fuel.