Republic up; Hawaiian Airlines falls; TAM to become 27th member of Star Alliance in May-2010

The majority of North and South American carriers’ shares fell on Tuesday (30-Mar-2010), as investors have become cautious ahead of the latest unemployment report, to be released this week. The AMEX Airline Index fell 0.9% as a result.

The Dow (+0.1%) meanwhile moved slightly higher, after The Conference Board announced during trading that the US Consumer Confidence Index rebounded in Mar-2010 to 52.5, after decreasing to 46.4 in Feb-2010.

Republic Airways (+2.2%) made one of the day’s biggest gains, as was Copa (+2.3%) after China Analyst identified the carriers as two of the top air transport stocks with the highest cash flow per share.

Alaska Air (-0.1%) meanwhile slipped, despite also being identified as having a high cash flow of USD9.44 per share.

TAM to become 27th member of Star Alliance in May-2010

TAM (-2.2%) shares took the day’s biggest fall. During trading the carrier confirmed it will enter the Star Alliance on 13-May-2010, as the alliance’s 27th member.

America Airline Daily is your one-stop shop for news, data and analysis from the dynamic North American, Caribbean and Latin American aviation markets. Other stories available in today’s issue include: 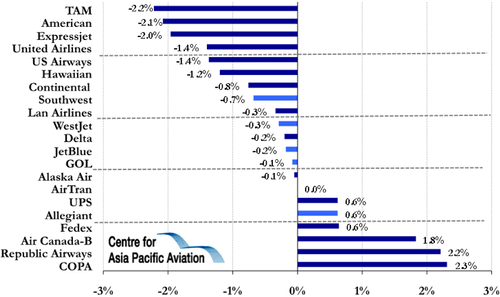