US Airways and American Airlines report in drop in passenger numbers

According to the carrier, consolidated passenger revenue per ASM (PRASM) dropped approximately 10% year-on-year, while total RASM declined approximately 9%. President, Scott Kirby, stated that despite the declines, “the revenue outlook continues to show material signs of improvement with continued strength in both close-in bookings and yields."

President and CEO, Sean Durfy, attributed the carrier’s profits to “relief from significantly lower fuel costs” and its “ability to successfully stimulate demand while keeping our controllable costs in line played an important part in our strong margins".

President and CEO, Jim Ream stated "going forward, our results will get better as the utilization of our fleet returns to pre-recessionary levels, and we remain very positive in our ability to attract new customers in both our contract and corporate aviation divisions." 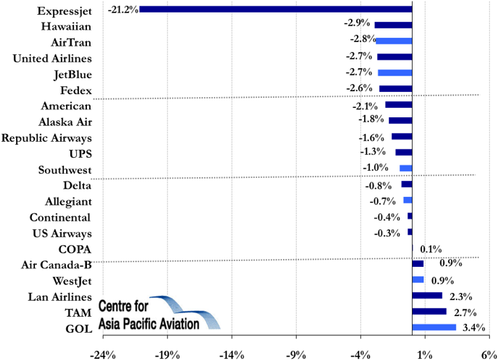