The majority of North and South American airline stocks were on the rise on Thursday (20-Aug-09), on the back of a rise in the broader market, due to a positive forecast of economic activity by The Conference Board and increased factory activity. As a result, the AMEX Airline Index (+2.1%) rose, as did the Dow (+0.8%) and oil prices (+0.2%), to USD72.54.

The rise in stocks was led by Republic Airways (+11.1%), presumably a continuation of its rise since its winning bid for the acquisition of Frontier. The carrier’s stocks were followed by Allegiant (+5.2%) and TAM (+4.8%), as the Bovespa (+1.2%) rose for the third day in a row, due to advancing commodities and an unexpected drop in Brazilian unemployment.

Southwest (+0.4%) stocks were up, following CEO and Chairman, Gary Kelly’s interview with the Wall Street Journal, in which he stated he would “endorse the view that things are not getting worse in the economy".

Expressjet (-5.4%) continued to fall on Thursday. The carrier announced late in the day that its Board of Directors has authorized an additional USD10 million for its previously announced securities repurchase program. The carrier stated it expects any purchases of the notes or the stock to be made from time to time in the open market or in privately negotiated transactions, with the timing of any repurchases under the program will depend on a variety of factors, including market conditions, and may be suspended or discontinued at any time. Common stock acquired through the repurchase program will be available for general corporate purposes, and convertible notes repurchased under the program will be cancelled. 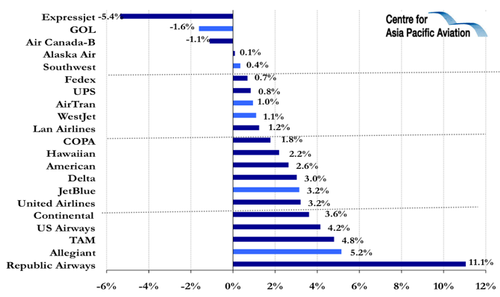 Southwest Airlines (+0.4%) may be set to fall again, following a Reuters report late on the day, stating the carrier’s slump could persist in the short term, following its failed acquisition of Frontier Airlines, three losses on the past four quarters, fare cuts and the offer of buyouts to staff. Jesup & Lamont Securities also lowered its rating of the carrier to “sell” on 19-Aug-09, and lowered its price target for the carrier’s stock to USD4.00, as it believes Southwest’s “slow growth strategy during the current economic downturn will limit its earnings potential over the next 18 months."

However, analysts Edward Jones believes the carrier’s “sound fundamentals” will allow it to overcome its short term issues.