Republic Airways (+2.1%) was up at the end of trade on Tuesday, following the carrier’s announcement that it had reached an agreement with Mesa Air Group to form a JV to combine the jet routes currently flown by both Mesa and Republic. Under the agreement, E170 routes currently operated by Republic Airways will be transitioned to jet service provided by Mesa. The three E170 aircraft will be returned by November and will operate in Republic Airways’ branded network.

Republic President and CEO, Bryan Bedford, stated, “during this period of economic stress within our industry, it is especially important to closely match capacity with demand, and this arrangement allows Mokulele to right-size the aircraft within its network". He added, "the agreement allows Republic Airways to reallocate its E170 aircraft within its branded airline operations, where they will be able to contribute to our network rebuilding efforts.”

American Airlines' stock (+0.1%) edged up only slightly, despite news during trading that US Senators, Herb Kohl and Orrin Hatch, have expressed concern regarding its trans-Atlantic antitrust immunity application, adding that such an agreement “raises significant competition issues” and merits close antitrust scrutiny by the US Justice Department.

The Senators expressed their concerns in a letter to Department of Transportation Secretary, Ray LaHood, and a Justice Department antitrust official, whose departments are reviewing the application that would allow American Airlines, British Airways and Iberia to expand cooperation within the oneworld alliance. 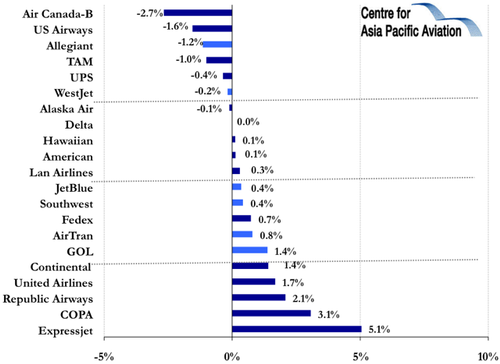