Republic Airways (+5.2%) was the biggest gainer of the day. The carrier commenced its codeshare deal with Midwest Airlines during the day. Frontier Airlines announced after trading that creditors have approved its bankruptcy reorganization plan and the purchase of the carrier by Republic. Republic expects to close on its purchase of Frontier on 01-Oct-09.

Hawaiian (+0.7%) rose slightly on the announcement it expanded its codeshare arrangement with Korean Air on 01-Sep-2009, covering Korean Air's Incheon-Honolulu and Incheon-Busan services. The agreement is to be further expanded in the near future to include Korean Air services to Japan, Malaysia, and Thailand.

Allegiant (-2.3%) and American (-2.3%) led those carriers which slipped during the day. American Airlines launched a "Double Elite-Qualifying Miles" promotion allowing AAdvantage members to earn twice the elite status qualifying miles when they fly on American Airlines, American Eagle, and AmericanConnection between 02-Sep-2009 and 15-Dec-2009, suggesting the carrier has surplus inventory over the period. 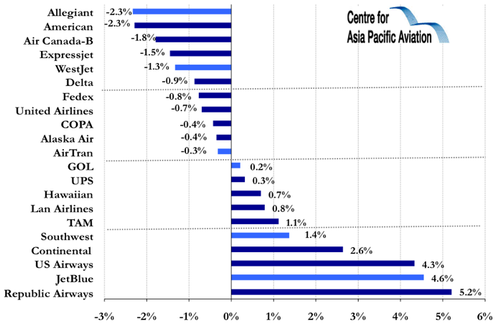