Shares were also hurt on news further disruptions may be imminent later this week, as further snow and storms makes their way towards the Northeast coast of the US. In the wider market, the Dow (+0.9%) was up, following comments by US Federal Reserve Chairman, Ben Bernanke, that interest rates would stay very low for quite some time, to sustain the recovering economy.

Continental aiming to start and keep making money in 2010

Continental Airlines (-1.2%) also declined. CEO and President, Jeff Smisek, stated the carrier’s goal for 2010 is to "start making money and keep making", however he noted that better year-on-year improvements must be "kept in perspective", due to unusually weak results in 2009. He nonetheless hopes "2010 will be a far better year than 2009", adding his focus will remain on international routes as it is "where the business traveler will pay a premium for a better product".

US Travel Association meanwhile announced during trading that the percentage of Business travellers planning to travel over the next six months has increased 2% year-on-year, to 15%, promising news for US carriers. However, the number of people planning to travel for leisure declined 7% to 56%.

For the latest in North and South American airline news, why not subscribe to America Airline Daily? Other stories featured in today’s issue include: 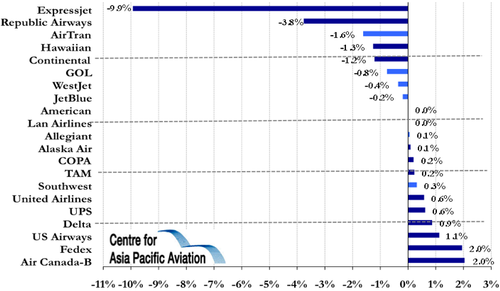