North and South American shares slid on Tuesday (04-May-2010) as world markets slumped on concerns a EUR110 million bailout for Greece will not be effective in helping the country out of its sovereign debt issues. The Dow (-2.0%) suffered its worst decline in three months as a result.

Even a 4.0% decline in oil prices, to USD82.74, could not stop airline shares slumping, with the AMEX Airline Index (-5.4%) ending trading significantly lower.

United Airlines (-10.6%) and Continental Airlines (-10.2%) led the declines in the wake of their merger, while US Airways (-7.2%) and Delta Air Lines (-6.6%) were also sold heavily after the US Department of Transportation decided to allow Delta and US Air to swap slots at Reagan Washington National Airport (DCA) and New York's LaGuardia Airport (LGA). But it is subject to the condition that the carriers divest themselves of a number of slots at both airports to preserve competition. While Delta and US Airways made a counter-proposal in which they would transfer 15 pairs of slots at LaGuardia and 4 ½ pairs at Reagan National to several smaller carriers, the department said the carriers’ counter-offer would be insufficient to preserve competition at the two airports.

Delta and US Airways stated they intend to appeal this ruling to the US Court of Appeals.

Republic Airways (-0.8%) reported a larger-than-expected net loss of USD36.5 million, compared to a profit of USD2.2 million in the previous corresponding period. This translates to an EPS loss of USD1.06. According to Reuters, analysts had expected the carrier to report a net loss of USD0.18 per share.

The carrier also reported an operating loss of USD20.0 million, compared to a profit of USD2.2 million in the previous corresponding period.

Republic attributed the loss to costs related to the integration of Midwest Airlines and Frontier Airways and losses of USD7.5 million from the winter storms, which disrupted operations. 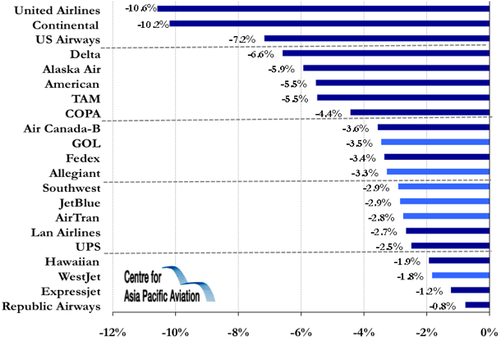