Republic Airways jumps again as market rises on strong tide. Continental up and Expressjet soars on

All North American and the majority of South American carriers’ stocks were up on Friday (21-Aug-09), as the wider market rose, following the announcement of improved home sales and positive comments on the state of the economy from Federal Reserve Chairman, Ben Bernanke, stating the prospects for a recovery in the economy in the near term are “good”. As a result, the AMEX Airline Index (+3.3%) and Dow (1.7%) were up, as were oil prices (+1.3%), to USD73.89.

Republic Airways (11.8%) stocks followed upwards, continuing its positive streak since its winning bid for Frontier Airlines on 13-Aug-09. The carrier started off the month with stock prices at USD5.18, ending Friday at USD7.62. 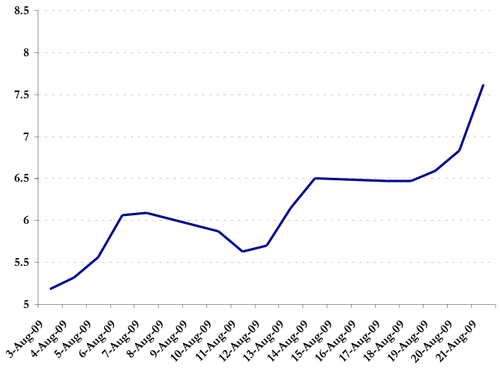 United Airlines (+3.6%) also gained, on the back of SmarTrend’s announcement later in the day that it remains bullish of the carrier’s shares, which it stated are currently above their 50 day moving average of USD4.14, forecasting they should find resistance at its 200 day moving average of USD6.92. United’s stocks ended the day at USD6.00. Continental (+8.4%) was a strong mover. Southwest (+2.2%) stocks were also up, after the LCC started selling services to Mexico through an online link to Mexican LCC Volaris’ booking portal.

Expressjet (+68.6%) stocks surged in the late afternoon, just before the end of trading, with just under 60,000 shares changing hands, compared to an average trading volume 5,000 shares a day, the largest single day the carrier has ever experienced. The surge followed its announcement on 20-Aug-09 that its Board has approved an additional USD10 million securities repurchase programme. 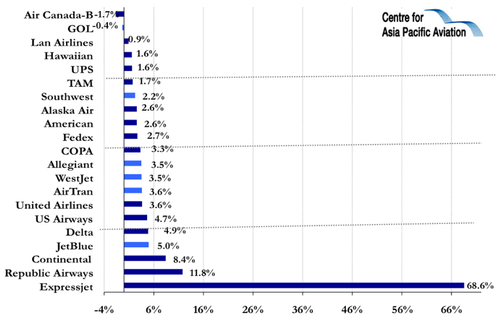