Unlisted Qatar Airways took delivery of its 20th B777 aircraft, with the delivery of a new B777-200LR.

Qatar Airways now operates 20 B777 aircraft, including 11 Extended Range (300-ERs), seven Long Range (200-LRs) and two freighter versions. An eighth -LR is due for delivery in Aug-2010. The airline has yet to announce to which destinations the new aircraft will operate.

Middle Eastern shares were relatively stable on Friday with Royal Jordanian (-0.6%) down and Air Arabia shares up by +0.6% while Kuwait National Airways and Jazeera remained stable.

Kenya Airways (+2.2%) released its traffic highlights for the three months ended 30-Jun-2010 with a 4% year-on-year increase in passenger numbers. The carrier’s traffic to Europe gained the most with a 16% increase to 93,073. 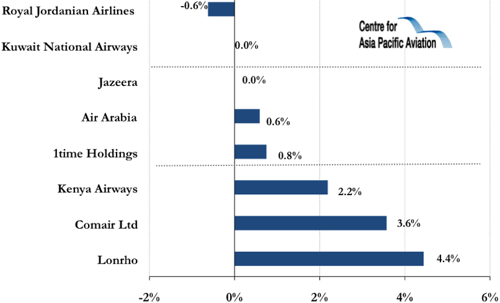