With oil threatening to climb consistently back above USD80 per barrel, Qatar Airways CEO Akbar Al-Baker, has called on governments to cut aviation fuel taxes to help provide relief for both airlines and passengers. The airline industry will have no choice but to pass any increase in fuel prices onto customers, threatening already highly price sensitive demand.

Mr Al-Baker has also stressed that the aviation industry “must speak with one voice” on the issue, if it is to have such a call heeded by authorities.

Relief from fuel taxes has helped some carriers to report profits even in the downturn. The Chinese Government has supported local carriers such as China Eastern and China Southern by scrapping some fuel taxes. Indian carriers have benefited from lower local fuel prices, but have been pressuring for years for a lowering of aviation fuel taxes, which average 26-28% in most Indian states.

Even some political groups have called for a modification in aviation fuel taxes. A group of Swiss parliamentarians recently requested the Swiss Government divert the funds received from its domestic aviation fuel tax from road to regional air travel safety and environmental measures. Two thirds of the EUR40 million generated by the tax is spent on road programmes. The issue comes to a vote at the end of Nov-2009.

Oil gets back above USD80 per barrel

Oil prices spent much of last week above USD80 per barrel, the first time it has crossed this level in 2009. For the week to 27-Oct-2009, the underlying crude oil price rose 1.0%, slowing somewhat after three weeks of rapid increases. 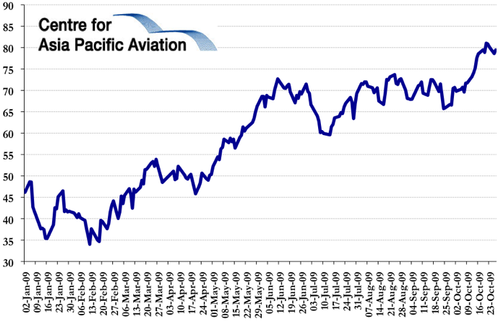 Jet fuel prices also increased marginally. New York Harbour and US Gulf Cost prices rose 0.9% and 1.0% respectively, while Los Angeles prices increased 0.8%. Amsterdam-Rotterdam-Antwerp exchange prices were up just 0.4%, the slowest of all markets, while Singapore prices were up 1.2%, although they are now nearly 10% higher than this time last year.

While crude oil prices are still 25% down on last year, jet fuel prices are now either just below or above the levels they were at 12 months ago. 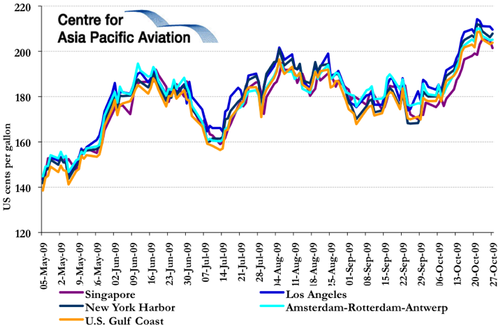