It was a stony-faced Alan Joyce who fronted the media a couple of weeks ago to announce further cutbacks in response to a “significant deterioration of trading conditions in the past few weeks”. Mr Joyce had seen the early yield and load factor figures for March – released today – and they were not pretty.

The carrier disguises its yields by reporting financial year-to-date figures and the airline excludes exchange rate fluctuations. The Centre’s analysis points to a collapse in international yields last month, down 11% year-on-year after a 2.4% reduction in February (excluding exchange).

Domestic yields have also fallen to depressed levels after hovering in the negative low single-digit range for much of the past financial year until January. February’s 9.7% plunge was followed by a 10.1% reduction in domestic yield in March, reflecting the Australian economy’s move into recession.

It is a sobering turnaround from a situation where Qantas’ international yields had been growing by over 5% year-on-year as recently as last October, and demonstrates the scale of the challenge the airline now faces. April yields could be equally as bad as markets deteriorate and competition intensifies, although the timing of Easter in April could lend some support. 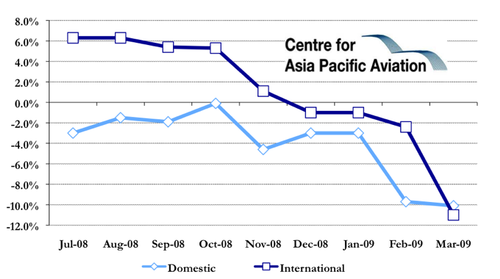 NB: December/January estimates are combined, as the airline does not disclose an individual traffic report for December.
Source: Centre for Asia Pacific Aviation estimates & company reports

Qantas’s mainline domestic and international load factors fell by 1.3% and 3.2%, respectively, in March. Yield and load factor reductions are a toxic combination for airline earnings, and are the drivers behind the Group’s recent warning on earnings.

The Group’s March figures also reveal the critical role of Jetstar amid this economic downturn. The LCC’s domestic and international load factors rose 3.1 ppts and 2.3 ppts to 81.8% and 73.1%, respectively. 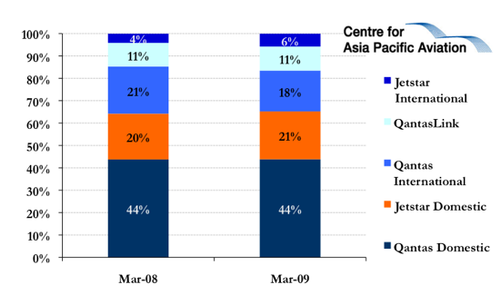 But Jetstar could be reaching the limit of its expansion within the group’s domestic flying operations. Its share of total group domestic capacity increased just 1 ppt to 21% in March 2009 year-on-year, while its share of group capacity on international routes rose from 4% in Mar-2008 to 6% to Mar-2009.

Alan Joyce conceded there are product and fleet limitations to Jetstar’s international expansion, though he identified further opportunities for A320 expansion within Asia, particularly from Singapore and its hubs at Perth and Darwin.

Jetstar’s domestic passenger traffic (RPKs) was steady in March, despite a 3.9% reduction in capacity (ASKs). Its international RPKs surged 25.7% on a 21.9% increase in ASKs.