Airbus may have raised aircraft prices at the beginning of the year, but aircraft residual values are sliding, putting multi-million dollar holes in airline balance sheets. This is due to a reduction in secondary market demand, reflecting weaker traffic and yields, as well as the large amount of new aircraft due for delivery in the next few years (particularly next generation types such as the B787).

Over the past three years, Boeing and Airbus have delivered a combined 2,731 aircraft, including a record 979 last year. Deliveries are expected to be marginally lower this year for both manufacturers, but still well over 900 between them.

Boeing Capital Managing Director (Middle East and North Africa) noted this week, while speaking to the Gulf Times, that aircraft, as an asset class, have held up better than most other investment opportunities. Boeing expects that some financiers will take advantage of the short-term market dislocations, to build a long-term aircraft portfolio. Sale-and-lease back activity could continue to gain in popularity as airlines look to preserve cash balances.

Qantas reported a AUD48 million (USD43 million) loss related to write downs in aircraft values in its latest results for the six months to 31-Dec-2009. In addition, depreciation costs will be approximately AUD50 million (USD44.8 million) higher in the second half due to a reassessment of aircraft residual values, reflecting the “reduction in secondary market demand”. The Qantas Group (including Jetstar and regional) operates approximately 250 aircraft.

In trading on Thursday, EADS shares gained 5%, on better news for its troubled A400M programme. Boeing shares were up 0.9%. Embraer shares fell 1.9%. 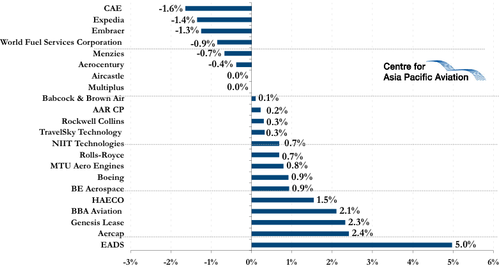