The New Zealand flag carrier's yields continued to crumble in Jul-2009, with Group yields slumping 11.3%, following a 4.9% reduction in Jun-2009. Short-haul yields took a hammering during the month, following Jetstar’s entry in the domestic market, down 13.1%, while long-haul yields also down year-on-year for the first time in over 12 months, by 11.9% in Jul-2009.  Air New Zealand is scheduled to release FY2008/09 results this week.

Qantas' shares slipped 4.6% on Friday. The carrier has attributed its significantly reduced FY2008/09 net profit due to falling demand on London and Los Angeles services, once the carrier’s main profit generators, due to increased competition and reduced premium demand  (premium traffic has fallen in the 20-30% range) stemming from the global financial downturn. However, the carrier stated that its domestic services were still profitable.

Elsewhere, Taiwan’s China Airlines shares slipped 1.2%. Chairman, Philip Wei, stating the carrier could return to profitability by the end of 2009, beating existing forecasts, due to strong demand for cross-Strait services.

Mr Wei stated cross-Strait services now comprise 10% of the carrier’s business and are currently profitable, with the carrier adding that it has seen an overall pickup in demand this month, with the worst of the global downturn “already passed”. However, Mr Wei conceded that “the recovery speed is still pretty slow for both passengers and cargo”.

Jet Airways' shares slipped 0.2% on Friday. The carrier's shares were downgraded from “neutral” to “underweight” by HSBC, which stated that price elasticity of demand and down trading are likely to continue, resulting in premium traffic and yields not rebounding before FY2010. Rising costs are also a threat to the carrier’s profitability and could reverse the operational improvement seen tin the last few quarters, according to HSBC, which added that it expects the carrier’s debt over hang to continue. However, in more positive news, HSBC stated it is believes that domestic passenger decline has bottomed out, with recovery in demand expected in 2H2010.

Among the gainers on Friday, Thai Airways jumped 8.5%, with Cathay Pacific up 0.4%. 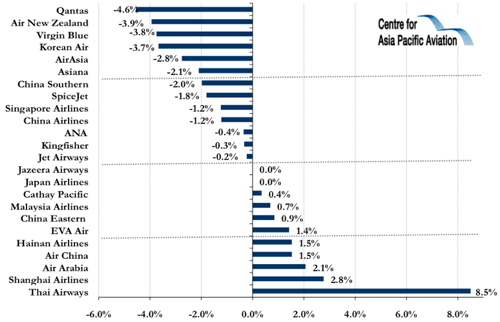