Cathay Pacific’s shares gained 4.7% to HK15.20 yesterday, its highest close since Jul-2008, after the carrier reported its best half-year result in two years and a return to profitability for 2009.

See related report: Cathay Pacific cautious on 2010 outlook, but in the midst of a solid turnaround

Qantas’ shares rose 2.5% as it reported an improvement in yields in Jan-2010, while Tiger Airways soared 4.9% to SGD1.70 as it reported rising load factors and soaring demand. It was Tiger’s highest close since it commenced trading on 22-Jan-2010. Virgin Blue also advanced 2.7%. 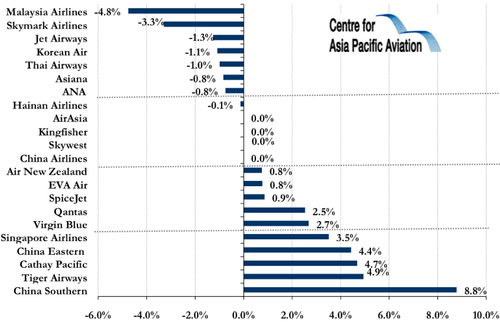