Subsequent to close, AirAsia and Qantas announced plans to hold a media conference on 06-Jan-2010 to announce the details of their strategic agreement between Jetstar and the Malaysian LCC, discussing how the two plan to work “innovatively together” to improve cost efficiencies.

The two carriers reportedly plan to work together to obtain better pricing for aircraft and parts purchases, and the agreement may also include maintenance services.

Also in Southeast Asia, Tiger Airways announced plans to launch its IPO investor roadshow this week. The LCC plans to list on the Singapore Stock Exchange later this month.

Another tough year ahead: Ryanair

In Europe, Ryanair CEO, Michael O’Leary, stated he expects Europe’s top executives to face another tough year in 2010, adding that he expects 2010 “to be very conservative”. 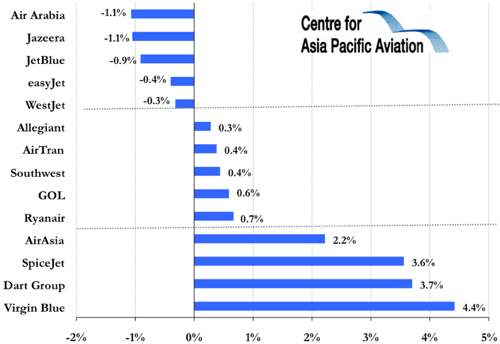