The decision responds to a proposal by Sydney Airport to increase charges for the provision of terminal, check-in, passenger security and bag screening, runways and apron parking services to regional airlines by up to 2.9% from 23-Oct-2010.

Sydney Airport expressed disappointment in the decision. CEO Russell Balding said that the proposed increase of 2.9% was significantly less than the 28.9% increase in the CPI since 2001.

Today, it was announced passenger numbers at Sydney Airport rose 7.6% year-on-year for Aug-2010 to 3.0 million. The rise was the result of an improvement in domestic and international traffic, up 8.2% and 6.3%, respectively.

MAp’s other airports, Copenhagen Airport and Brussels Airport also handled an increase in passenger numbers, up 12.9% and 2.4%, respectively.

Infratil was flat. In today’s trading, the company reported the following traffic highlights for its European airports in Aug-2010: 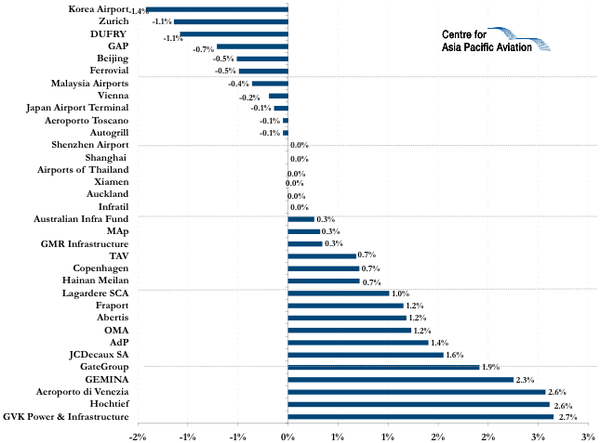