IATA Director General and CEO, Giovanni Bisignani, stated that the aviation industry “is not out of the woods yet”, after releasing the latest IATA international air traffic statistics for Aug-2009. He added that “demand continues to improve, but profitability remains ever distant”.

According to the industry body, while fares have “stabilised” – albeit at a “profitless level” - cost pressures are mounting from reduced aircraft utilisation and rising oil prices.

According to IATA, “to match capacity with demand, airlines have reduced daily aircraft utilisation in recent months. For example, average daily hours for the global B777 fleet dropped by 2.7% to 11.1 hours per day during the first eight months of the year.  Lower utilisation helps load factors, but spreading fixed asset costs over fewer hours in the air pushes up unit costs”.

The one bright spot remains the Middle East, with the region’s carriers being the only ones to grow in the month, with a 10.8% increase in demand (RPKs), slightly lower than the 13.2% growth in Jul-2009, due to a distortion related to the earlier start of Ramadan compared with 2008. The growth was fueled by increased capacity (+13.8%) and greater market share on long-haul travel via the expanding Middle Eastern hubs. 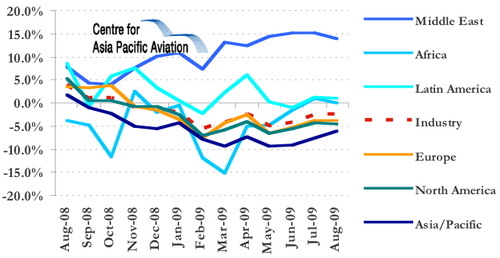 Worldwide IATA scheduled traffic (RPKs) meanwhile, fell 1.1%, although this represents an improvement from contractions of 2.9%, 7.2% and 9.3% in the previous three months, respectively (and compares with a decline of 6.0% in the eight months to Aug-2009).

Compared to the low point of Mar-2009, seasonally adjusted passenger demand has improved by 6%, but traffic levels remain 5% below May-2008 levels, when the decline in demand commenced. All regions, except the Middle East, saw improved demand conditions in Aug-2009 compared to Jul-2009. 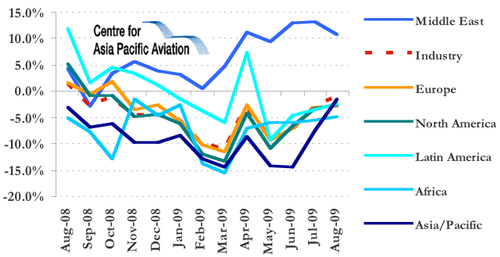 Asia Pacific carriers see most significant improvement in Aug-2009, off low Aug-2008 base

This improvement is however partly driven by the fact that Aug-2008 was the start of the steep decline in passenger demand for the region’s airlines. This region, which IATA has previously stated has been the worst hit by the recession, is where second and third quarter growth has been strongest, boosted by “massive” government and central bank stimulus packages and fewer problems with consumer debt and bank balance sheets, according to IATA.

IATA also saw a return in passenger confidence in Latin America with the end of the flu season in the Southern Hemisphere, following a dampening in demand following the swine flu outbreak earlier this year, while African carriers showed the weakest demand at -4.9% in Aug-2009.

International passenger load factors stood at 80.9% in Aug-2009, as capacity was better aligned with reduced demand than in previous months. The Aug-2009 load factor was an improvement from Jul-2009’s 80.3% load factor. North American carriers had the strongest load factors during the month, at 85.5%. 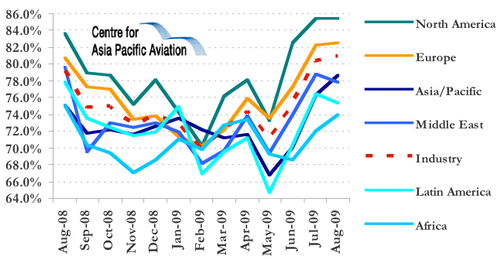 Freight demand on international markets was down 9.6% in Aug-2009 representing fifteen consecutive months of contracting demand. However, this represented an improvement from the 11.3% contraction in Jul-2009, as all regions experienced improvements in demand compared to Jul-2009.

However, freight demand remains “exceptionally weak”, according to IATA, at 16% below Apr-2008 levels, when the fall in freight demand commenced. However, compared to the low point of Dec-2008, seasonally adjusted freight demand has improved by 12%.

The Latin American and Middle Eastern carriers were the only ones to report freight growth of 3.9% and 3.0% respectively, in the month. Meanwhile, Asia Pacific carriers, representing 44% of the global freight market, saw year-on-year demand improve marginally from -9.5% to -9.0% in Aug-2009, compared to Jul-2009. 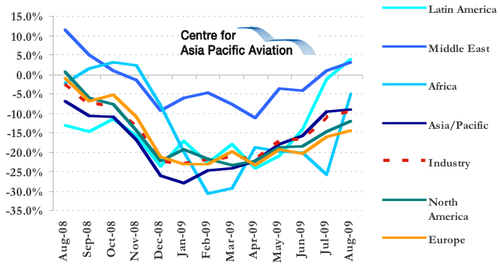 According to Mr Bisignani, “even with improving demand, there are few bright spots in the industry”. In urging a “fundamental” rethink of liberalisation/ownership regulations, Mr Bisgnani also warned of a “difficult” fourth quarter ahead.

The carrier also recently updated its loss forecast for 2009, with the association now expecting a combined loss of USD11 billion in 2009, compared to an earlier prediction of USD9 billion.