Premium traffic recovery to continue in 4Q but remains below pre-crisis level: IATA

Premium traffic rebounded further in Sep-2010, increasing 12.1% year-on-year, although they still remain below pre-recession levels, according to the International Air Transport Association (IATA). IATA added that it expects the recovery in premium traffic to continue into the final quarter of the year. 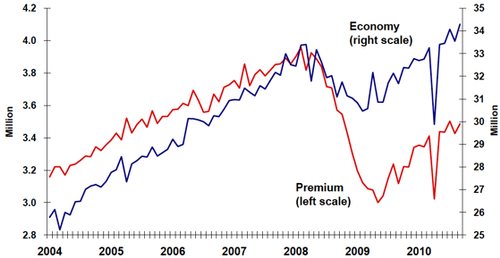 Despite the rebound, the Sep-2010 premium traffic levels remain some 11% below the figure for Sep-2007 and 4% lower than Sep-2008 although IATA added that the latest figures suggest that “earlier concerns over a stalling of recovery of premium traffic might have been misplaced”. IATA continued: "Business travel continues to be the key to overall international travel markets, with business confidence moving higher in major economies but consumer confidence weakening.”

Premium traffic grew strongly in 3Q2010, up 10.3% year-on-year, although levels remain some 5% below 3Q2008 levels and just over 8% below 3Q2007 levels. IATA also stated that the latest trade data and output from the business confidence surveys suggest continuing underlying momentum for premium traffic. 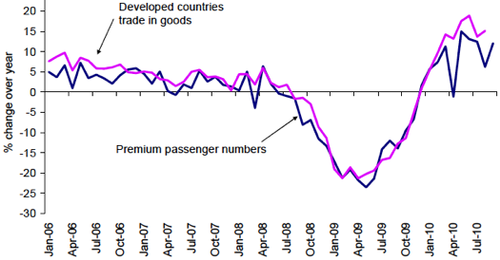 Economy traffic, meanwhile, has recovered “relatively rapidly” from the downturn and, on a seasonally adjusted basis, is above 2007 levels. Economy traffic increased 9.3% in Sep-2010 to be 9.4% above Sep-2008 levels with growth of 6% from Sep-2007 levels. However, IATA cautioned that the latest consumer confidence data shows another downward tick in the index but added that it is “too early to determine whether this is the start of a trend or just a 'blip'”.

Economy passengers and business and consumer confidence indexes: 2006 to Sep-2010 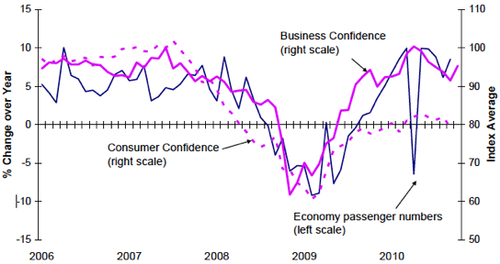 The total number of passengers, measured by flight segment rather than true origin and destination grew by 9.5% year-on-year in Sep-2010, with passenger numbers up by around 6.4% on a year-to-date basis.

IATA added that the final figures for Aug-2010 suggested that the slowdown in that month was greater than first indicated with an increase in premium passenger numbers of 6.2% and of 4.9% for those travelling in the economy cabin. These rates were against a background where premium passengers in Jul-2010 had increased by 12.5% and economy by 7.8%.

Meanwhile, IATA commented that the rate of growth in premium revenues appears to have stabilised over the past three months. While yields are continuing to increase, IATA noted that volume effect on revenues has been greater in the third quarter than earlier in the year. In Sep-2010, premium revenue increased by 17% with volumes 12% higher. Comparatively, in May-2010 premium revenues were almost 29% higher on volumes up 19%. 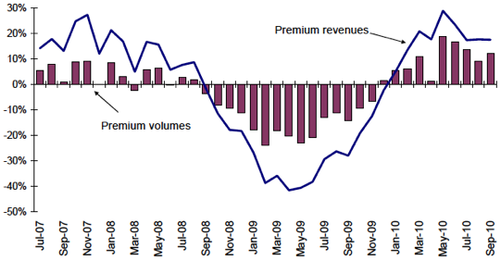 There continues to be a range in experience between regions with the highest rates of premium traffic growth on routes that are within or to/from Asia. 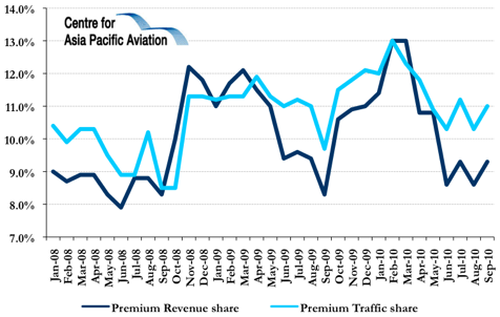 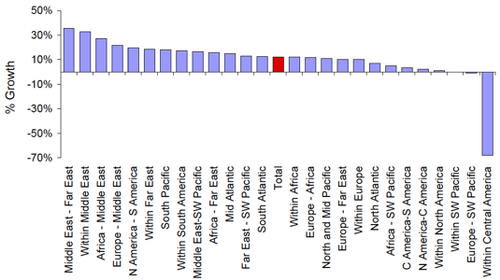 Traffic and profits to slow in 2011

Although the key leading indicators remain broadly positive, growth rates from now will appear slower, due partly to the more “testing comparators” as traffic levels began to rise in the early stages of recovery during 2009.

The aviation industry is now reverting to slower growth with this trend consistent with IATA’s recently revised global industry outlook which forecasts an industry profit of USD8.9 billion (up from the Jun-2010 forecast of USD2.5 billion) based on an exceptionally strong first half of the year.

However, the industry remains financially fragile, with ticket prices and yields still remaining depressed due to strong global competition despite recent improvements.