Premium traffic on the rise but below pre-crisis levels; earthquake and unrest to hit figures

IATA stated traffic momentum was strong at the start of 2011 and rising business confidence points to further gains in the months ahead. However, premium fares are still estimated to be around 15% below their pre-recession levels despite rebounding significantly from the 2009 low. The association also noted that unrest in the Middle East and the Japanese earthquake disaster would likely hit Feb-2011 and Mar-2011 figures.

IATA stated that while it is too soon to judge how the Japanese earthquake and tsunami will affect air travel, "the market is large enough to have a materially adverse impact on the international total for that month".

"Japan has been a relatively slow growth mature economy in the Asia Pacific region but premium travel is significant since Japan is still the third largest economy in the world (and was second largest until recently). Japanese markets represent 6-7% of the global total," IATA stated.

IATA also noted that the unrest in Egypt, Libya and other North African nations have resulted in “sharply reduced” travel there during Feb-2011. African airlines carry about 4% of international traffic but all the markets connected with Africa represent around 6% of the premium revenue market. “The ongoing political problems are certainly large enough to put a dent into the February passenger data,” IATA said. 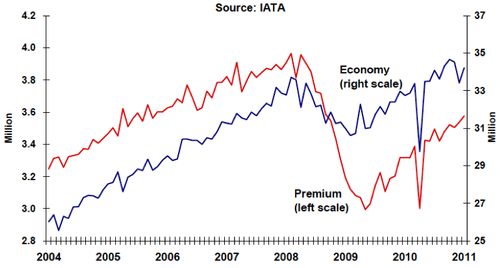 Premium travel markets have risen almost 20% from their mid-2009 low point, reflecting improvements in the worldwide economy, but the size of this market is still 10% smaller than before the recession. Premium travel, over the past year, has been and continues to be on an underlying trend growth rate of around 7%, smoothing out volatility. This is almost twice as fast as the pace at which this market expanded between 2004 and 2007. 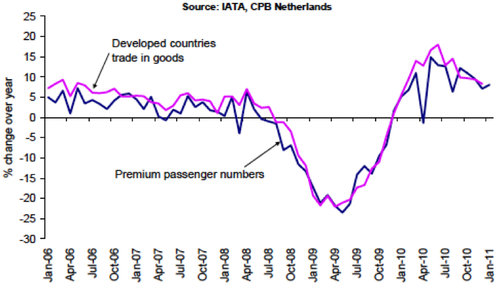 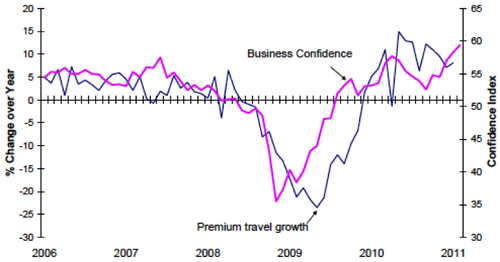 Growth in economy travel, less hard hit than the premium sector in the financial crisis, has stalled in recent months. Economy travel rose 2.4% between Dec-2010 and Jan-2011 but this only partially restored the loss seen in Dec-2010.

Economy travel had been expanding at an annualised rate of 6% until Nov-2010 but that is less exceptional being almost exactly in line with the trend growth rate experienced between 2004 and 2007. Economic travel has risen by 12% from its 2009 low point, taking this segment “to new highs” with international economy travel markets still 1-2% higher than before the recession.

Fares still rising but remain around 15% below pre-recession peak

Fares, including fuel surcharges, are still rising, although these increase are now required in order to partially recover higher fuel costs. Load factors and supply-demand conditions have been slipping since their 2010Q2 peak but remain close to historic highs. Average fares and yields have been rising as a result.

Premium fares are still estimated to be around 15% below their pre-recession levels but have rebound significantly from the 2009 low and are still rising at a single figure pace. IATA estimates that premium revenues rose by around 15% in Jan-2011 compared with Jan-2009 levels. 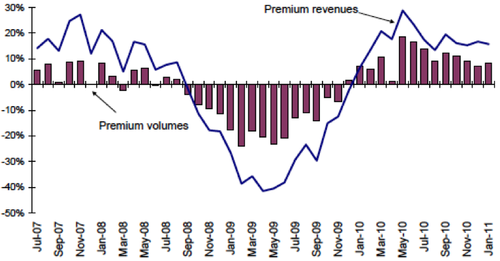 As is generally the case, there continues to be differences in the recovery of premium traffic by region.

The strongest of the larger premium markets continue to be those connected to the Asia Pacific region. South America is another strong growth region, albeit smaller than Asia, while Central American passenger numbers continue to be influenced by the bankruptcy of Mexicana. The Middle Eastern flight segments also continue to be strong for premium travel.

At the other end of the growth spectrum were markets connected with Europe. Recession and continuing economic problems in the periphery of Europe have significantly dampened outbound leisure travel, according to IATA, although weak exchange rates have helped boost exports and business travel. Within Europe premium travel looks to be back on its structural decline trend, with a 5% increase compared with a 9.6% rise in economy travel. 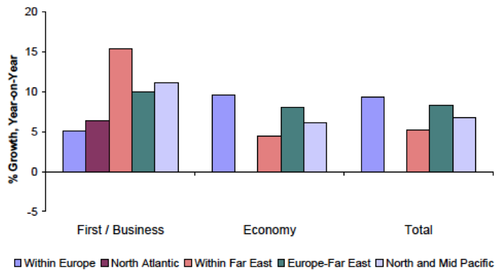 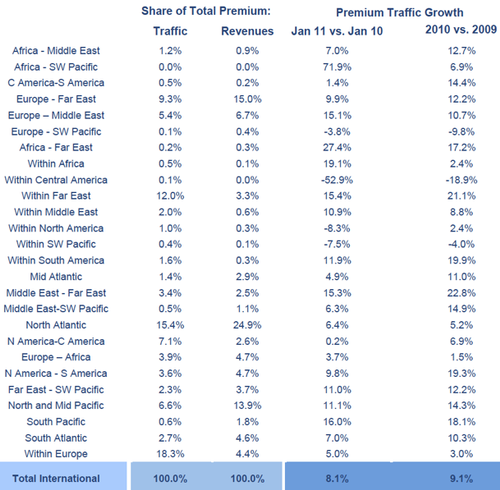 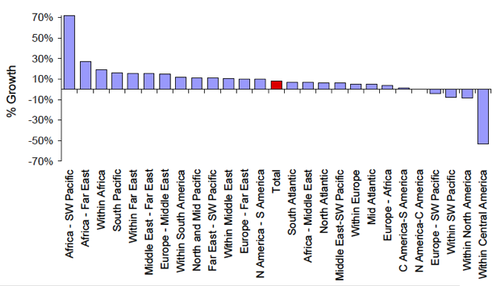