Worldwide premium air travel demand growth eased in June, reflecting slower world trade demand and weakening business confidence, according to airline industry association, IATA. Since these figures were assembled, global financial markets have experienced significant volatility and uncertainty, though IATA remains reasonably positive about airline prospects. It noted that premium passenger markets are expected to show further growth over the months ahead. But it warned that growth rates are likely to “run at a slower pace”.

In Jun-2011, the level and growth rates for passenger numbers travelling on premium and economy seats dropped back from the levels seen in May-2011, although the growth trend was still upwards, according to IATA. Levels also improved on a year-on-year basis, with premium travel increasing 6.4% and growth of 4.8% for economy travel. Premium traffic was 11.1% higher in 1H2011 year-on-year. 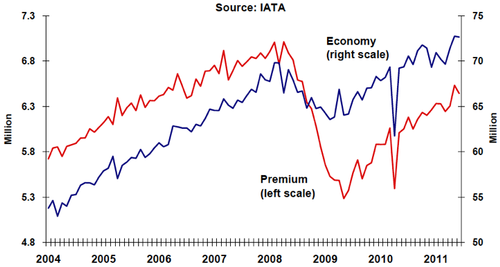 Premium travel has typically grown in line with developed country international trade. The rate of growth of that trade has declined from high single-digits in 2H2010 to mid-single digits during 2011 so far, IATA said. Another key indicator for premium travel, business confidence, has also been declining over the last several months to now rest on the borderline between output expansion and contraction which will also be dampening growth. 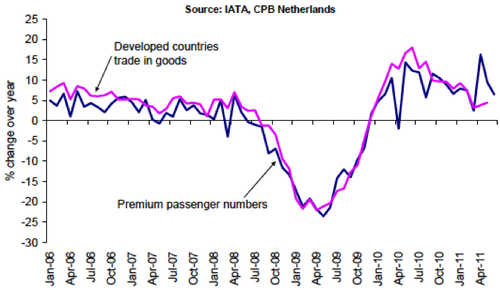 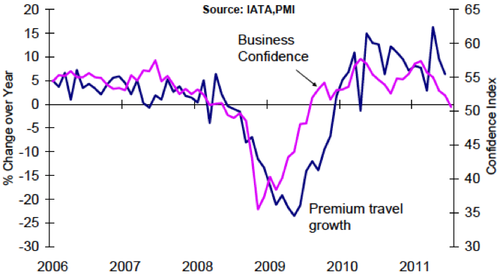 Premium revenues expanding at annual place in the low-teens

As in preceding months, the experience with passenger yields continues to differ significantly between markets. Still relatively tight demand-supply conditions for US airlines have allowed them to reflect higher fuel costs in passenger yields which have risen back to pre-recession levels in previous months. However yields have not been as strong in other regions. Industry wide, IATA estimates that premium revenues are expanding at an annual pace in the “low teens”. 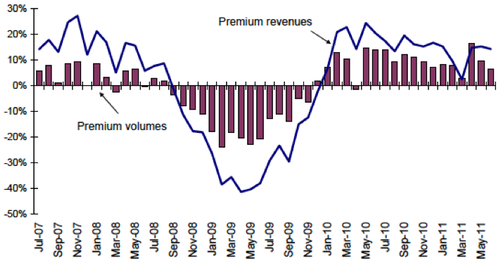 The level of economy travel declined slightly in Jun-2011 after sharp increases in the preceding two months. Despite the declines, economy passenger numbers are now 5% higher than the high point before the recession. In Jun-2011, economy traffic was the strongest in markets linked to Europe. 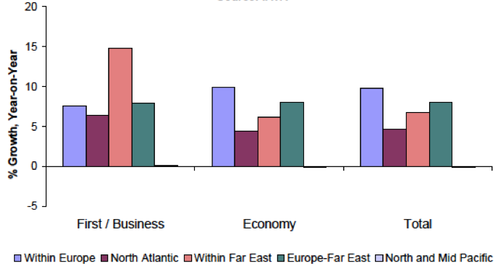 IATA noted that while there is volatility in the data month-to-month, the absence of a sharp downward movement in Jun-2011 following the recent rises “increases the likelihood that economy passenger numbers are now being less affected by the impacts of high fuel prices”.

The regional picture continues to remain mixed, with some major markets showing robust growth while others are still being affected by the aftermath of shocks or economic uncertainty. 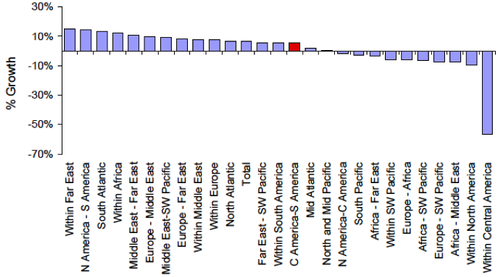 IATA Director General emeritus, Giovanni Bisignani, as quoted in IATA's Airlines International, earlier this month noted that the future for aviation is not in North America or Europe but the Asia Pacific. He noted that Europe and North America played their role in building the industry but are no longer in a position to lead. Asia Pacific is the largest aviation market and it has the biggest potential for growth, he said. 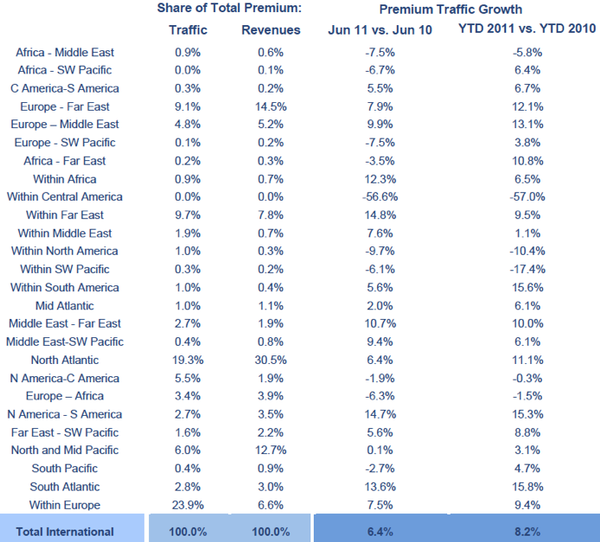