Worldwide premium demand continued to contract sharply in Feb-2009, falling 21.1% year-on-year, even after adjusting for the effects of the Leap Year in 2008, according to IATA. It was worse than the 16.7% decline in Jan-2009.

More worryingly, the industry body estimates premium revenues declined by around 30% in Feb-2009, observing that since Nov-2008, premium fares have been “cut at an accelerating rate”.

This is having a devastating impact on carrier yields and is driving the aggressive cutbacks to airline networks and – increasingly – staffing levels. IATA reiterated that premium market revenues are key for the profitability of most network airlines, “and so this reversal will be putting significant pressure on first quarter financial performance”.

IATA also observed that average travel distances are now getting shorter as long-haul international markets suffer most, as a result of the unprecedented collapse in world trade and investment flows. This trend could play into the hands of the LCC sector. Many LCCs are reporting increasing numbers of corporate travellers trading down to budget carriers. 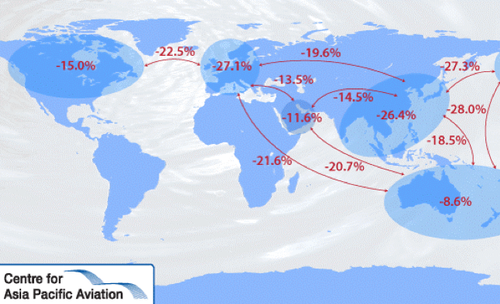 There was also a “particularly large deterioration” in both premium and economy travel across the North Atlantic; premium travel fell 22.5% in Feb-2009, following a 14.5% fall in Jan-2009, according to IATA

When will we reach the bottom?

IATA warned some further decline in premium travel during the next few months is likely before the bottom to this cycle is reached. But it added the “first tentative sign” of a floor in major markets was shown by Europe-Asia Pacific premium travel, where the decline slowed from 21.2% in Jan-2009 to 19.6% in Feb-2009, and by more after accounting for the Leap Year.

Both the US and the European economies were shrinking at rate of over 5% at the end of 2008 and are forecast to shrink a further 2-3% in 2009. IATA stated, “that suggests (hopefully) that the economic decline may bottom out by mid-year. If so, the business travel sector will be among the first to show signs of revival as international trade and supply chains usually are the first parts of the economy to turn around”. It added however that a “significant economic recovery is not being forecast until 2011”.

The question is whether the full service airline business model can hold out until then?