Premium airline revenues remain 18% lower than their 2Q2008 peak with premium traffic 11% below the pre-recession levels according to IATA. Premium revenue grew an estimated 15% in 2010 after slumping 27% in 2009 with revenues continuing to grow at a faster pace than passenger numbers as fares continue to increase. Premium travel traffic rose by 9.1% in 2010 while economy travel increased 5.9%. Premium traffic is expected to “see further robust growth” and continued momentum over the coming months with some further yield increases likely during 1Q2011. 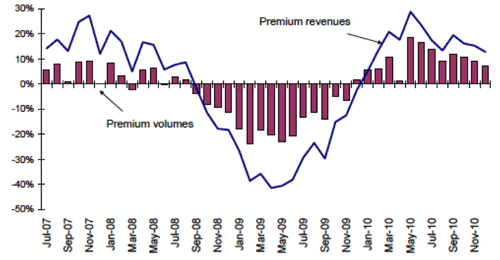 Deceleration in fare and passenger yield despite 'rapid' recovery in 2010

IATA, which labelled the recovery in premium revenues from the mid-2009 low as “rapid”, noted that there has been some deceleration in the fare and passenger yield recovery. US airlines’ international yields, after stripping out seasonality, moved sideways during the last three months of 2010. However, average international fares, also seasonally adjusted, expanded through to Nov-2010 at a still robust annualised rate of 9%. Passenger load factors are close to record highs and fuel prices are rising sharply.

The weather-related dip in Dec-2010 meant that by the end of the year international passenger markets were still 2% below the pre-recession peak of early 2008. They had just recovered these levels in Nov-2011. Premium travel fell further in recession, has recovered the fastest and still has momentum, but is still 11% below pre-recession.

Meanwhile, the poor weather conditions in Europe and North America hot first and business class air travel in Dec-2010. As a result the year-on-year growth rate of passengers on international markets slowed from 7.6% to 2.8%. Premium travel held up much better in Dec-2010 than economy travel, slowing from 9.6% to 7.1%, compared with a slump in economy travel from 7% to 2.4%. The overall number of international airline passengers in 2010 grew by 6.2%. 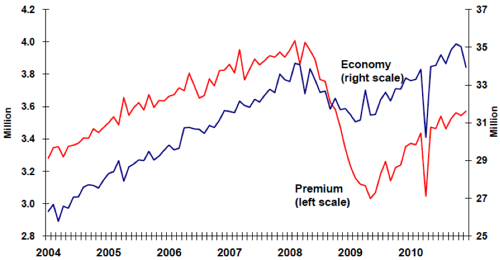 The pace of recovery, meanwhile, continues to vary “tremendously” by market. Some, linked to the so-called developing economies, have now expanded well above previous peaks. Others, mostly in the developed markets, remain well below pre-recession levels. IATA expects to see “continued divergence” in air travel markets in 2011 given the continued divergence of economic performance expected during the year. 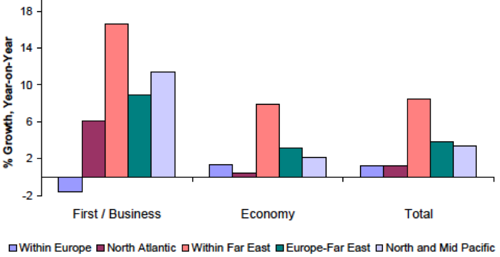 Strongest growth during Dec-2010 was seen in Asian markets, within the Far East and Europe to the Far East, driven by business travel associated with trade and investment flows. The mid-Atlantic premium market also continues to strengthen. African markets are also growing. At the other extreme, economy travel within Europe was hit very hard by the bad weather and weak economic conditions. The North Atlantic market was also down sharply as the bad weather hit an already weak flow of economy traffic. 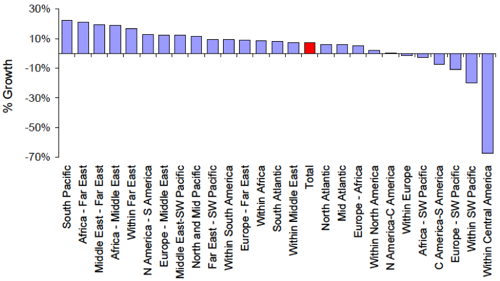 Growth in premium air travel continues to move in step with growth of world trade. While there is still considerable momentum to world trade, the level of trade is still 8% below early 2008 peaks. IATA noted that “there is no reason to think that export and import volumes will not grow further this year. Premium travel volumes are in a very similar situation, both in terms of market size relative to pre-recession peaks and in terms of growth momentum.” 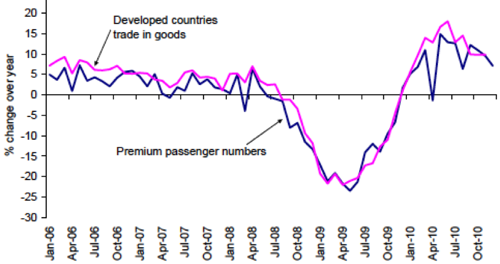 Meanwhile, business travel still appears to be the main driver of growth in air travel, according to IATA, which stated that business confidence surveys point to further momentum ahead in this key air travel segment. 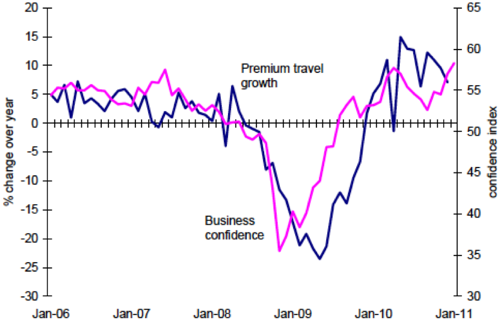