Reading Pegasus' results is complicated by foreign exchange movements, since the majority of its revenues and, particularly, its costs are denominated in hard currency (mainly EUR and USD). Expressed in EUR terms, rather than in Pegasus' reporting currency of TRY, Pegasus lowered its CASK (cost per available seat km) in 2Q, but not enough to compensate for the drop in RASK (revenue per available seat km).

Nevertheless, Pegasus reiterated its FY2014 guidance amid some signs that it may have turned a corner and be ready to leave the path of deteriorating margins.

In 2Q2014, Pegasus Airlines grew its net profit by 72% compared with the same period a year earlier to post a figure of TRY87 million (EUR30 million). Revenues increased by 33% to TRY800 million (EUR276 million). The net profit was boosted by foreign exchange movements both from operating activities and from financing activities.

A truer reflection of the underlying performance of the business can be seen in the operating profit before other operating income and expense (which excludes these currency effects). This figure fell by 16% to TRY81 million (EUR28 million).

Pegasus continued its strong capacity growth in 2Q2014, with ASKs up 22.1%, slightly slower than the 28.4% growth in 1Q2014. Although growth was stronger in international markets than in the domestic market, the difference was not as pronounced as it had been in 1Q2014.

Passenger load factor was flat (-0.1 ppts) at 79.9% for 2Q2014, a figure that is broadly equal to that of Europe's full service carriers (as represented by the Association of European Airlines), but short of the load factors achieved by most of its principal LCCs. The load factor on the international network fell by 1.2ppts to 76.3% in 2Q and this looks to be an area of considerable scope for improvement.

Pegasus increased its total number of destinations by 18% year on year to 84 and will have launched nine new destinations during summer 2014 (Madrid, Frankfurt, Kuwait, Mineralnye Vody, Prague, Geneva, Bahrain, Hamburg and Budapest). It also moved its Belgian operation from Brussels Airport to Brussels South Charleroi.

It increased frequencies on a further 18 routes, but a considerable proportion of Pegasus' capacity growth is coming from new routes and this appears to be having a weakening impact on load factors for now.

CFO Serhan Ulga told analysts on a conference call to discuss the 2Q results that Pegasus was seeing load factor improvements of around 1ppt in its bookings for the late summer months in the domestic market. In international markets, he said there continued to be a small fall in load factor, but yields were recovering. 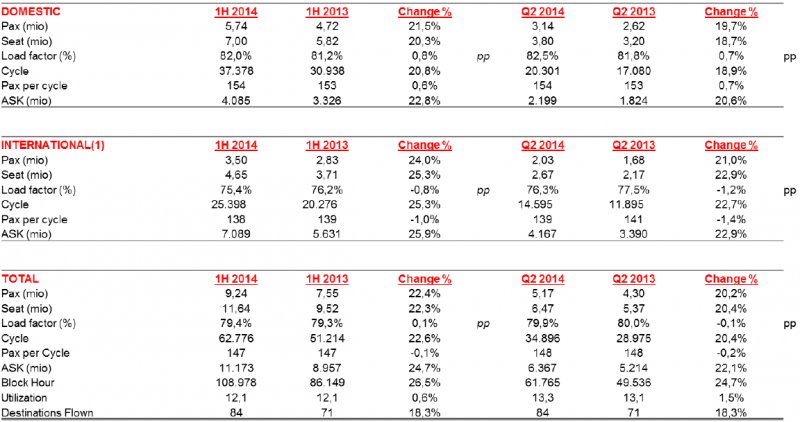 Pegasus' 2Q revenue growth of 32.5% was faster than the growth in ASKs. This was mainly driven by international scheduled flight revenue, which grew by 37.8% and accounted for 44% of total revenues. Domestic scheduled revenue growth of 20.2% was broadly in line with domestic ASK growth.

Total revenue per ASK grew by 8.5% in 2Q, an acceleration on the 5.7% increase in 1Q. However, this increase in TRY-reported RASK was boosted by the weaker TRY against the EUR.

In EUR terms, RASK fell by 10.1% and this better reflects the market environment, particularly in the competitive international markets operated by Pegasus. While still weak, the fall in EUR RASK was less severe than the 17.9% decline suffered in 1Q2014. The competitive impact on pricing of Turkish Airlines' expansion into Pegasus' Sabiha Gokcen hub appears to be easing.

Operating costs increased by 41.8% in 2Q, faster than the growth in revenues and ASKs. Fuel costs, which accounted for 41% of the total, increased by 40% and ex fuel costs grew by 43%. Cost per ASK (CASK) increased by 16.1% in TRY-reported figures, but fell by 3.8% when expressed in EUR.

TRY weakness versus USD is bad for profits

Pegasus' functional currency is the euro, but its reporting currency for its financial statements is the Turkish lira. The weakening of TRY had the effect of raising both RASK and CASK in its TRY-reported results relative to its EUR-denominated management accounts, but the impact on costs was greater than it was on revenues.

This was mainly due to the significant imbalance in Pegasus' USD exposure in its income statement. It has 54% of costs in USD, but only 13% of revenues (1H2014, source: Pegasus), so a weaker TRY versus USD lowers its operating profit.

Its EUR exposure is greater on the revenue side (39%) than on the cost side (26%). This means that a weaker TRY versus EUR actually increases operating profit, but the impact is less significant than the USD impact. 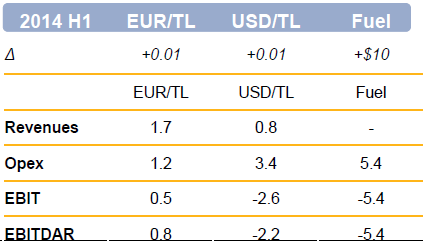 Mr Ulga said that many of the costs that have burdened Pegasus in recent quarters were one-of in nature and should ease in future quarters. The outlook for CASK in EUR terms is "to remain stable for the near term", although it fell by 2.1% in 1H2014.

Pegasus may have turned a corner in 2Q2014

While both RASK and CASK increased year on year in TRY terms and both fell in EUR terms, the key point is that RASK performed more weakly than CASK in either currency and this was why the operating result deteriorated. 2Q2014 was the fourth consecutive quarter when the spread between RASK growth and CASK growth was negative.

More encouragingly, the rate of decline in EUR RASK eased in 2Q2014 versus 1Q2014 and EUR CASK once again fell after two quarters of small increases. The curve plotting the spread between RASK and CASK, while still negative, turned upwards in 2Q2014 after a period of sloping downwards (see chart below).

Although Pegasus expects lower margins in 2014 than in 2013, at least the RASK-CASK relationship stopped deteriorating in 2Q2014. This helps to give some reassurance that profitability could start to improve once more. The seasonally important 3Q, when the bulk of its profits are earned, will be the key to its achieving (or perhaps bettering) its 2014 target. 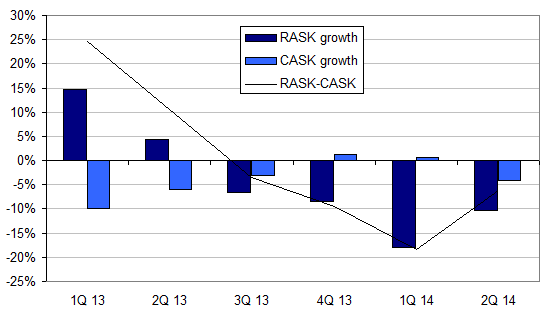