The world’s airlines are enjoying a solid recovery in business travel, according to the latest figures from IATA. Passengers travelling in premium classes rose by 18.7% year-on-year in May-2010, while passengers travelling on economy seats rose by 10.2%. The industry body noted: “Adjusted for seasonality, premium travel has risen almost twice as far in percentage terms from its 2009 low as economy travel, but, such was the depth of the fall of the premium segment, current levels are still 10% below pre-recession peaks, whereas economy travel is now 5% above its pre-recession peak.” 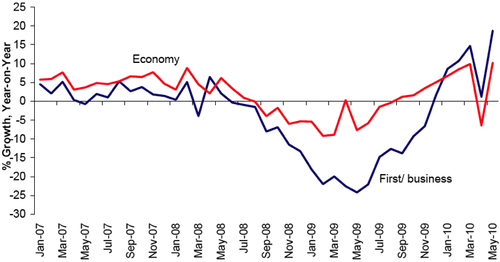 Volumes up, but yields still 15% below pre-recession levels

IATA stated that passengers travelling on business "have returned", as world trade and business confidence continue to expand. However, the risks of unemployment and consumer debt remain high in most developed economies, leading consumers to “take a conservative approach on their spending by cutting their travel budget for holidays” and this has been slowing the pace of recovery in leisure travel.

IATA estimates premium revenue surged by 44% compared to the same month last year, driven by higher volumes, average fares and yield. “However, yields have not bounced back the same way than passenger numbers. Despite a faster average growth rate of 8% during the first months of the year, yields and average fares are still below their pre-recession level by some 15%.”

The regional picture of growth remains unchanged, according to the industry body, “with strong rebound in premium passenger numbers in Asia and Middle East". IATA continued: "Routes linked to Europe and North America are lagging behind with modest growth rates, due to weak economic conditions. On the North Atlantic market, total passenger numbers were down 0.4% during the first five months of the year."

Route segments linked to the Middle East region, which now represent more than 10% of international premium travelers and 9% of revenue, continued to expand sharply in May with growth rates within a range of 7-22%. According to IATA, “these strong growth rates reflect not only the good economic conditions in the region, but also the increasing number of long-haul passengers connecting from Europe.” 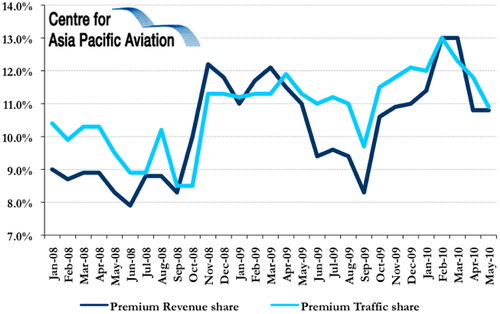 Routes linked to South and Central America continue to expand, reflecting new services and higher business demand in the region. The “impressive” year-on year growth rates for Central and South America reflects also low market levels reached last year, due to the impact of the Influenza A (H1N1) on the number of passengers travelling to those regions.

IATA stated the confidence in manufacturing and services businesses indicates further expansion of global economic activity. But while growth rates eased during May and June, suggesting that growth of global economy may have passed its peak post-recession rebound pace, “indicators of business travel remain positive”.