Asia Pacific full service airlines have been seeing a pick-up in passenger travel and air cargo demand in 2010, according to the Association of Asia Pacific Airlines (AAPA). AAPA commented that Jul-2010 traffic results “provide further evidence of the strength of the recovery in both passenger and freight markets, with volumes surpassing pre-recession levels”, adding: “Commercial activity has also picked up strongly, leading to a rebound in premium passenger traffic on both regional and long haul routes” 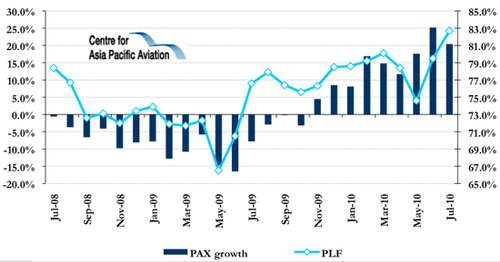 In the latest month of data, AAPA members carried a record 17.2 million international passengers in Jul-2010, a 20.4% year-on-year increase (for the ninth consecutive month of growth and the sixth consecutive month of double-digit growth), boosted by particularly strong demand on busy regional routes, with the excellent results in both Jul-2010 and the seven months to Jul-2010 reflecting growing consumer confidence in the Asia Pacific region.

However, capacity growth in the month did represent the second largest increase in over 40 months (after 6.4% growth in Jun-2010) as the region’s carriers made some “measured additions to capacity” and selective expansion across their networks. But AAPA noted that “continuing uncertainties about the prospects for further growth in North America and Europe suggest a measure of caution”. 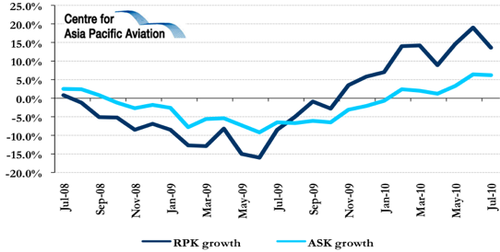 This result marks the best load factor level in at least over 40 months and the 12th consecutive month of load factor gains. 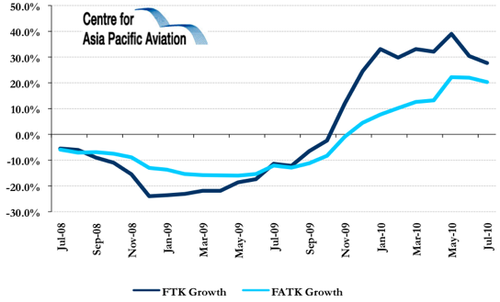 2010 has generally been a good year for Asia Pacific airlines, with reasonably low fuel prices, strong cargo demand and a recovery in business travel. Profits have flowed at most carriers. AAPA commented that Asia Pacific airlines are “generally well placed to benefit from the improving business environment”.

However, Mr Herdman warned that the “very high growth rates recorded in recent months, as a result of the surprisingly sharp V-shaped recovery, will obviously taper off as the economy stabilises and reverts to a more normal pattern of growth”.

Accordingly, the region’s airlines are, according to AAPA, “still focused on careful management of capacity, tight cost controls, and ongoing efforts to achieve further productivity improvements as the industry strives to restore profitability after two years of heavy losses.”

With the US economy apparently on a knife edge of returning to recession and European growth still weak, this caution is warranted.