On the final day of trading before the Paris Air Show last Friday, aviation suppliers reported mixed results, with airframe manufacturers up, but engine producers dropping. Recent Paris and Farnborough events have been ordering bonanzas for airframe, engine and component manufacturers, but most of the talk this year has attempted to downplay any expectations of orders. Airbus and Boeing are focusing on minimising damage to their order backlogs, and the knock-down effects on lower tier suppliers.

EADS was essentially flat (+0.1%, going against weaker European markets), while Boeing was up 1.5% (with US markets having mixed results on Friday). Embraer’s share price was up 1.4%.

EADS, parent of Airbus, confirmed over the weekend that the worst effects of the downturn have yet to be felt by aircraft manufacturers, with 2010 expected to represent the worst of the crisis. The European aerospace group has shifted into cash conservation mode, suspending its North American acquisition plans and cautioning that its EUR8.5 billion cash reserve could be whittled away if the risks facing the group (such the delayed A400M programme) materialise over the next two years.

Airbus insists that its record order backlog storm proofs it against the crisis. CEO, Tom Enders, stated on Sunday that the manufacturer could withstand the loss of 1,000 aircraft orders and still have a five-year production backlog. EADS has confirmed that it is chopping narrowbody production rates from 36 to 34 per month in Oct-2009, and also freezing A340/A330 production levels at 8.5 per month.

Meanwhile, there has been the glimmering of some promise for more orders. Qatar Airways is expected to announce “significant orders” at Paris (which runs from 15 to 21 June), while Ryanair confirmed it is in negotiations with Boeing and Airbus for up to 300 aircraft. The Irish carrier currently operates an all-Boeing fleet.

Rolls-Royce and MTU Aero Engines were both down on Friday (0.7% and 1.1%, respectively). However, early news from the Paris Air Show suggests the engine competitors are relatively bullish, with Pratt & Whitney confirming it is considering acquisitions to add to its core engine manufacturing business and CFM announcing it has received just four engine order cancellations in 1Q2009. Abu Dhabi-based Etihad Airways reportedly plans to make a multi-billion dollar order for engines for 100 Airbus aircraft at the Paris Air Show. 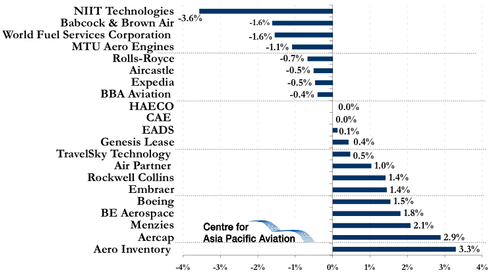