Into the mid-1960s, Orlando was a small town, yet the largest city in Orange County, Florida, and focussed on the needs of surrounding citrus growers. But a miscalculation across the country in Orange County, California, changed all that.

Disneyland had opened in 1955 and was an immediate hit. Its popularity quickly filled the surrounding property with hotels and restaurants, leaving no room for the theme park to grow. Aware of the fact than few visitors to Disneyland came from the east, and wanting the room to expand the concept, Disney began to acquire land in central Florida, a spot with generally good weather yet far enough from the Florida coasts to be out of immediate hurricane threat.

Though the parks are not actually in Orlando, it is the nearest major city and has quickly become “home” to the world’s largest entertainment complex. In subsequent years, the city has broadened its economic base, but the parks and service sector continue to provide the biggest draw.

Despite the fact that Disney parks now are spread across the globe, the complex in Florida continues to bring the most visitors, with the four Disney parks attracting nearly 50 million visitors of late. And many of those travelers come by air.

But much of the demographic attracted to the region is also price sensitive, making the airport a focus of low cost operators, led by Southwest and backed up by AirTran and JetBlue. Once the Southwest/AirTran merger is complete, the combined carrier will provide 38% of the airport’s available seats, a number akin to the nation’s other playground city, Las Vegas. 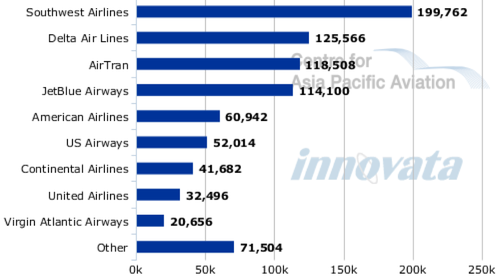 The nature of the traffic is also revealed in that flights to/from London all operate from Gatwick rather than Heathrow. BA operates two-class aircraft and Virgin offers some flights on its A330-300s without an Upper Class compartment. It is a destination to which USD10,000 first-class seats are in short demand. 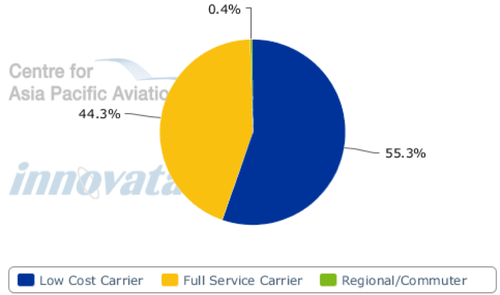 Nonetheless, its global appeal is not to be denied. During the high summer season, TAM operates twice daily A330 flights to SAO, a long expensive operation that would not survive without strong demand.

Other European operators offer non-stop service from Dublin, Frankfurt, Glasgow and Zurich.  And despite the presence of a Disney park near Paris, Air France operates three weekly (two-class) 777s to Orlando. The airport has a larger international reach than might be otherwise expected for a city its size – and it is almost all destination traffic. 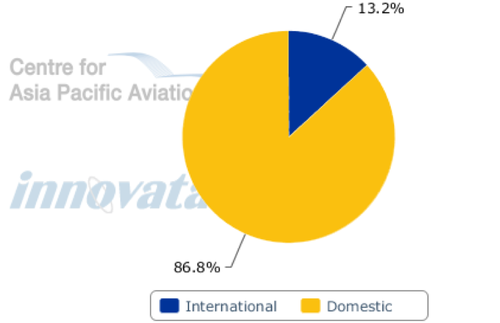 The largest market is the Caribbean, which in this tally includes Mexico. Absent is Asia where Disney operates a park in Japan, making the brand a popular one. Perhaps the improved economics of the B787 or A350 will make the 7300 mile non-stop economically feasible. 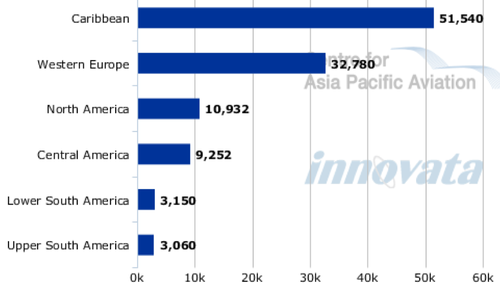 As might be expected at an airport dominated by low cost operators, alliance-linked airlines play a minor part in the service pattern, providing just 40% of the seats. 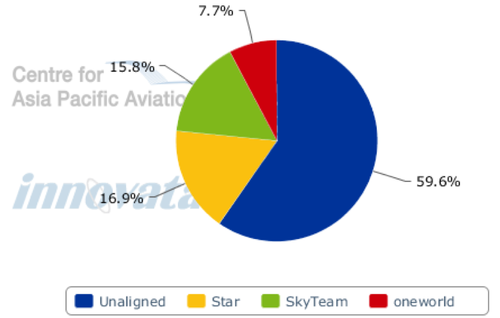 Given that many visitors purchase package tours that include air, there are noticeably more flights that either operate only on weekends or substitute larger equipment on Saturday and Sunday. Though the region now has a diversified economy, the flight patterns offer schedules that show the ongoing importance of the area’s tourist attractions.

Fares to New York range from USD225 to just over USD400 for an economy ticket but the availability of all-inclusive packages probably means that airlines take lower yields in exchange for bulk sales.

Additionally, many of the attractions are within close proximity, making a car less necessary and raising the appeal of travel by air.

Somewhat recession proof but not set for fast growth

While it did not totally escape the recession, central Florida fared much better than Las Vegas or Phoenix which saw spectacular drops. MCO saw some slight drop beginning in 2007 and through 2008 but projected numbers for 2011 envision totals near to those highs.

Orlando is near the bottom of the top 30 and has declined a bit over the decade, down from 24th in 1999. Given the nature of its traffic and its draw, the region will probably continue to experience slow, but steady growth but may fall off the list as rising stars elsewhere move up the scale.