oneworld vs Skyteam in the battle for JAL; Air China takeover of Shenzhen Airlines?: SHARE WRAP

Japan Airlines’ shares remained unchanged on Thursday, even though American Airlines stated it would lead a USD1.1 billion investment in the struggling carrier to prevent its move to the rival SkyTeam Alliance.

Meanwhile, Delta Air Lines stated it, in conjunction with its other SkyTeam members, is ready to offer JAL a financial aid package of approximately USD1 billion, including a USD500 million equity investment, with the carrier considering teaming up with a third party investor, such as a private equity fund or venture capital firm, to support the carrier.

Rival ANA’s shares rose 3.9% yesterday, as the carrier reportedly plans to integrate its Japan-US passenger operations with Star Alliance partners, United Airlines and Continental Airlines, according to the Nikkei.

The carriers plan to establish sections within one another’s' companies that would work together as a single entity, to strengthen and expand the existing ANA-United codeshare agreement.

Air China’s shares rose to a 19-month high on Thursday, before closing up 0.8% for the day and up 11% over three days, on continuing speculation that it could take over Shenzhen Airlines, further enhancing Air China's competitive position in the Chinese domestic market and crucial Pearl River Delta.

All three carriers have seen renewed investor interest in the past month. The Bombay Stock Exchange’s 30-share Sensex has risen by 11.6% over the past month, while Jet Airways, Kingfisher Airlines and SpiceJet have experienced gains of 51%, 36% and 62%, respectively. 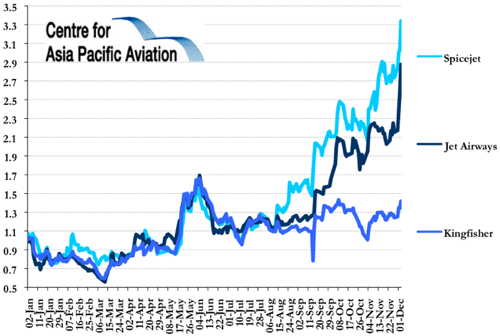 Contributing to the gains is the reduction in ATF this week, increased load factors and optimism of a potential turnaround in the current quarter.

Kingfisher has stated that it expects “higher guest numbers and much stronger yields” in 3QFY2010, with SpiceJet CCO, Samyukth Sridharan, earlier this week stating that “demand is back” and the carrier is “optimistic” about its financial performance of the next two quarters.

Jet Airways, upon the release of its 2QFY2010 financial results, added that it “expects yield improvements with the peak season, as well as a premium demand revival in the next few quarters”, following positive signs of increased demand and stablisation in the business environment in recent months. 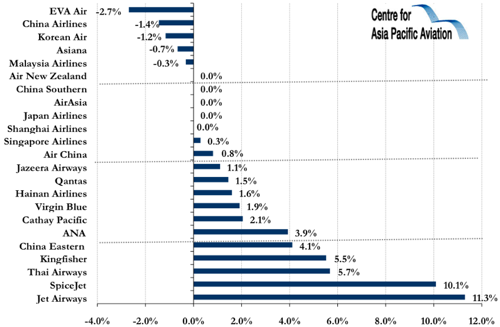