The British scheduled and charter airline Monarch has announced its winter flying programme for 2010-11, with plans to add frequencies on existing key scheduled routes and add new services. Monarch has established its scheduled division, Monarch Scheduled, previously known as Gold Crown, as one of the major operators of flights to the Mediterranean despite having adjusted its service offer in accordance with low-cost competition, much to the annoyance of some of its original clients.

It is intriguing that Spain seems to be coming back into fashion for Monarch and one must assume that a calculated gamble has been taken, namely that the value of the pound sterling (GBP) against the euro (EUR) will continue to rise. It is the weakness of the pound against the euro that has been the main reason for a reduction in UK visitors to Spain, in favour of non-euro countries like Turkey and Egypt this summer. On 12-Aug-2010 the exchange rate had risen to EUR1.21/GBP1. Another factor though is that most British airlines had cut back their Spanish frequencies; and some of them possibly too severely, so that by increasing them now they merely return to the previous level.

A third factor is that very few Spanish airlines will dare "take-on" British LCCs in their own backyard. Iberia is typical. Where once it used to operate flights from Barcelona and Madrid to Manchester for example, it now only operates to London Heathrow, and that was the case long before there was any talk of a merger with BA. Vueling flies to London and Edinburgh but the airline it merged with, clickair, revealed it would not fly, for example, to a UK airport such as Manchester, while there was UK-based competition nearby from easyJet and Ryanair. The reason is that, typically, the ratio of UK domiciled passengers to Spanish domiciled ones is at least 80:20, a very high figure for any international route, meaning that the advantage of marketing within the (far bigger) principal market lies with the UK-based airline. And there is no indication of any change in that outlook. Earlier this year, Spanair announced service to Birmingham Airport but did not actually commence the route, though it did start operations to Edinburgh, which has gained a large number of LCC routes having not previously been attractive to budget airlines.

So it is probably of no coincidence that Monarch, which has always striven to differentiate itself from the LCC herd, has made Manchester its primary and largest scheduled operation base, while Gatwick is its primary charter operation base. 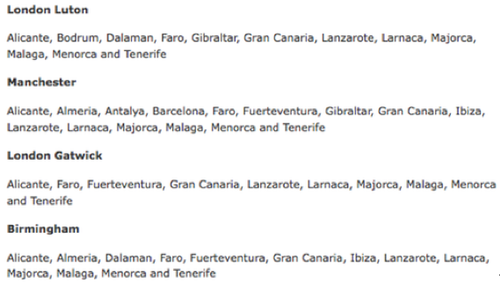 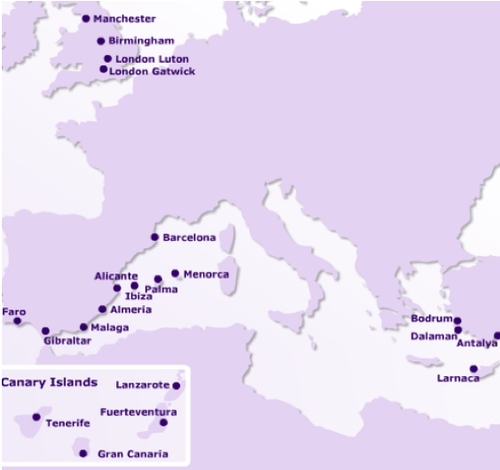 That differentiation is not as clear cut now as it was – as recently as five years ago – when the service was branded Gold Crown and included full in-flight entertainment facilities including a movie on flights of a little more than two hours duration; free newspapers from a wide selection; a choice of hot meals with wine; seat selection without charge; and a generous free baggage allowance. There was often a superior service level to that found in business class on a carrier such as British Airways. The Monarch management clearly felt it had to respond to the challenge of the LCCs as they expanded rapidly either at the airports at which it operated or at those within a short radius. As a result none of the services mentioned above are now available without charge and an online reservation takes much the same length of time as one on Ryanair, as a list of chargeable options (bags, insurance, pre-allocated seat, extra legroom etc) is provided before conclusion of the transaction. Checked baggage charges vary from GBP9.99 to GBP16.99 per item online, depending on the route, and are GBP18.00 via a call centre or at the airport, for a maximum of 20kg. The hand baggage weight limit is 10 kg, the same as Ryanair’s.

Many of Monarch’s customers reacted badly to these changes but the airline has been able to retain most of them partly because it has continued to preserve an image that is distinct from rivals like Jet2.com, which typically carry a much younger age range of passenger, and young families. Monarch’s customers tend still to be retired or early-retired "greys" in the ABC1 socio-economic group with property or vacation villas on the Spanish Costas. Despite the plethora of budget airline flights from British secondary airports to Spain they will often drive past those airports to one of Monarch’s four UK bases. The airline is even known in some quarters as "old faithful".

The same is true for businesspeople, for whom Monarch is sometimes the only airline to offer a direct flight between commercial cities, such as Manchester and Barcelona. Even so, Monarch has been known to experiment perhaps a little dangerously. For example, the two-year agreement with nightclub brand HedKandi, which saw flights to clubbers’ Nirvana, the Balearic Island of Ibiza (which also caters for families and greys), branded as FlyKandi with a special livery and dance CDs for sale onboard.

The executive in charge of this reverse makeover was Tim Jeans, who remains as Group MD, having been MD of the scheduled service division. Mr Jeans has been Sales and Marketing Director with Ryanair during its early boom period from 1994-2002, then MD at the now defunct LCC MyTravel Lite.

Monarch's odds were 4-1 to fail

Earlier this year, Monarch was rocked by a number of executive management resignations, including those of CEO Peter Brown, Flights and Holidays MD Liz Savage, who went to Virgin Blue, Group CFO Alistair Moffat, who went into academia, and Danny Bernstein, the non-executive chairman who was a former managing director. The defections prompted Mr Jeans to deny there was turmoil at the airline but at least one bookmaker, the Irish company Paddy Power, ran a book on Monarch being the next airline to collapse, at 4 to 1, following the demise of Flyglobespan. Odds on other airlines to be next to fail included Thomson at 16-1, bmibaby at 18-1, Thomas Cook at 40-1 and Air Force 1 at 1000-1 (!). In a similarly jocular vein Mr Jeans retorted that placing a bet on Michael O’Leary to be the next boss of British Airways was a better bet at 18-1, pointing out: “Monarch is the oldest airline still operating under its original brand name. It is privately-owned by wealthy shareholders and has accumulated substantial assets in its balance sheet over 41 years of profitable trading.”

The privately owned group enjoys the backing of the billionaire Mantegazza family, which committed to injecting USD1 billion of their own money into the group’s plans for the six new Boeing 787s due in 2013. Monarch Airlines’ ownership vehicle is Monarch Holdings, which is 100% owned by the Globus Travel Group. The Globus brand dates back 80 years. The airline Monarch was originally formed in 1968 as the in-house airline of the Cosmos Holidays brand, which itself was formed in 1961.

The airline has 30 aircraft with six on order, as in the table below.

Monarch Airlines handled 413,786 passengers in Jun-2010, a 1.6% year-on-year increase with an average load factor of 86.1%; a 2.9 ppt load factor improvement. Mr Jeans stated: “Despite the difficulties and uncertainty caused by the recent volcanic ash episodes our figures clearly demonstrate that people want to fly and will continue to do so. Our route network is performing well under what remain very tough market conditions, and seats are selling fast for the summer."

Monarch is undoubtedly a survivor and has a pedigree that many of today’s LCCs may find it difficult to match. Its faith in the Spanish market – the only other countries the scheduled division operates to are Portugal, Turkey and Cyprus – has worked well for it so far but may not yet have been fully tested: for example, if AENA’s millionaire air traffic controllers do strike as they have threatened to do.