Oil prices may have plunged below USD70 per barrel this week, but fuel cost are fast emerging as a major concern for airlines as they consider the prospects for 2010 and a global economic recovery.

IATA already expects Brent crude oil prices to average USD72 per barrel in 2010, adding approximately USD7 billion to airline costs over 2009 estimates. But IATA’s Director General and CEO, Giovanni Bisignani, has cautioned that airlines may find it “very difficult to implement” fuel surcharges to offset the increase, squeezing cashflows that are already at critical levels for some carriers.

Some increases may be possible, particularly in more protected markets, such as North Asia. Hong Kong’s Civil Aviation Department (CAD) gave approval this week for passenger fuel surcharges levied by Cathay Pacific and Singapore Airlines to rise by up to 3% for October. It has also moved to review passenger fuel surcharges on a monthly basis, instead of bi-monthly, to reflect more quickly the changes in aviation fuel prices. The CAD’s last fuel surcharge review was conducted in Jul-2009. Japan Airlines and All Nippon Airways have both already received permission from the Japanese Government to increase their fuel surcharges from the beginning of October.

Mr Bisignani has also expressed concerns that fuel speculation could drive prices up, and that the issue should be “carefully evaluated” and handled more effectively by national governments.

Air New Zealand’s CEO, Rob Fyfe, commented this week that while there are early signs that the decline in travel has bottomed, fuel price volatility makes financial forecasts for 2010 very difficult. Since the beginning of Sep-2009, crude oil prices have seen a variation of around USD10, while jet fuel prices have varied by about approximately USD7. Such a variation can alter the carrier’s bottom line calculations by NZD50-60 million (USD36.5-43.5 million).

Southwest Airlines Chairman, President and CEO, Gary Kelly, echoed this sentiment, stating on Monday that a combination of weak travel demand and fuel price volatility means that the carrier cannot predict if it will be profitable during 3Q2009. While the carrier’s profitability outlook is better than several months ago, its overall 2009 result will still largely be dependent on fuel costs.

Oil remains above USD70 per barrel

For the week to 22-Sep-2009, the underlying crude oil price rose 1.0% to USD71.5 per barrel, only dropping below USD70 per barrel once during the week. The past two days however have seen some big falls, taking crude back to around USD65 per barrel. 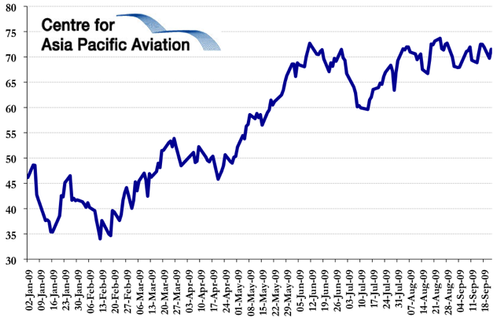 Jet fuel prices were up across the board in the week to 22-Sep-2009. Amsterdam-Rotterdam-Antwerp exchange prices rose 4.0% while Singapore prices were up 3.3%. US Gulf Coast and Los Angeles prices both rose 4.3%, with New York Harbour up 2.4%. Prices varied by as much as US ten cents per gallon over the week. 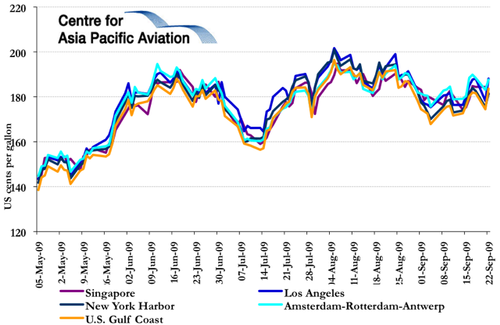