Oil prices continue to drop, as crude fell to a three-month low on the NYMEX this week, even touching below USD75 per barrel in interlay trade. Prices have retreated from a high of USD86 per barrel earlier in the month and are back to levels seen in early Mar-2010.

The typically lower London-based Brent North Sea crude price has not fallen to the same extent as prices on the New York exchange, with prices ending trading on Thursday at just above USD80 per barrel. A Barclays Capital analyst, speaking to Bloomberg, stated that the Brent is "acting as a much better benchmark for global fundamentals at the moment".

The dip in US prices is partly a result of the strength of the US dollar and the euro's weakness, but also the increasing stockpile of oil in the US, the world’s largest consumer, and lower demand expectations. The US Energy Information Administration reported another larger-than-expected increase in the nation’s oil stockpile, up by 1.9 million barrels last week.

The International Energy Agency revised its global oil consumption baseline forecast for 2010 by 220,000 barrels per day. The cut has come about due to lower-than-expected demand growth from some developing economies.

Despite the revision, the overall demand growth trend “is the same and all of it is coming from non-OECD countries” according to David Fyfe, head of the IEA's Oil Industry and Markets Division. While consumption across North America and the Pacific has actually been stronger than anticipated, expected demand increases in the Middle East and Asia have not been realised. The IAE’s forecast for consumption is 86.4 million barrels a day in 2010, and its view is that oil fundamentals seen in the first half of this year, do not support sustained advances in crude prices to USD100.

The weaker euro is also having a telling effect. While there was an early week rally on European markets, even the EUR750 billion safety net for the euro has not halted traders seeking refuge in the US dollar, while spot gold prices have been nearing record highs.

With the US dollar expected to remain strong, oil prices weakness is forecast to continue in the short term. However, with the Brent price at USD80 per barrel better reflecting the fundamentals of oil prices, most forecasts expect oil prices to remain in the USD75 to USD85 per barrel price bracket.

For the week to 11-May-2010, oil prices dipped 7.7% to USD76.37 per barrel. Prices are now only a third higher than they were this time last year, with the gap narrowing considerably with the recent declines in prices. 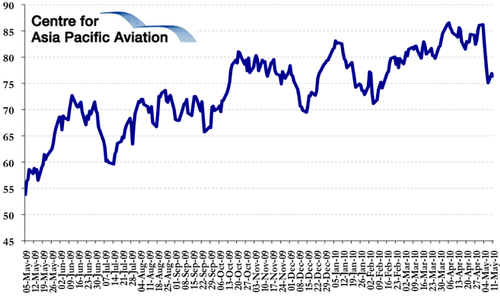 Jet fuel prices were down significantly, the second consecutive week of decline. Singapore prices dropped 9.7%, shedding more than 20 cents per gallon. USD markets were down approximately 6%, while the Amsterdam exchange dropped 5.1%. 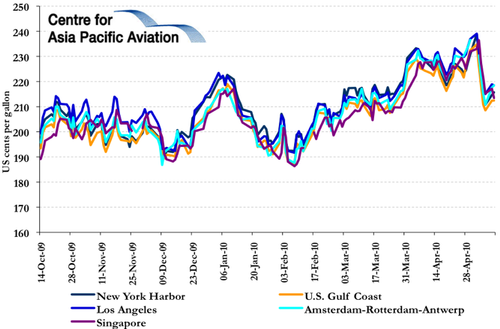