Oil soars above USD77 per barrel

Both the Dow Jones Industrial Average and the price of oil have hit 12-month highs this week, as investors respond to signs of an impending economic recovery. The Dow finished above 10,000 for the first time since its Oct-2008 plunge on Wednesday.

Oil prices hit USD75.20 per barrel on Wednesday, 12 months to the day since prices last topped USD75 per barrel - and have surged a further 3.2% overnight to USD77.58 in New York.

Demand down for major US carriers

While prices may be surging again, demand for jet fuel has still not recovered. The US Air Transport Association reports that fuel consumption by its 13 members was down 10.8% in Aug-2009. The carriers’ combined fuel costs for the month were USD3,015 million, while the average price paid was USD2.01 per gallon, a 43.2% decrease year-on-year, but 5% above average market prices. 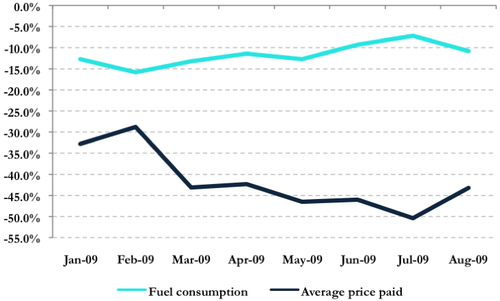 However, not all aviation fuel markets are shrinking. Chinese consumption is swelling, driven by very strong domestic passenger demand, and Chinese producers increased aviation fuel refining by 10% in 1H2009.

Air China reported yesterday that it purchased 260,000 tonnes of jet fuel in Sep-2009, at an average purchase price of approximately USD750 per tonne, a 39% year-on-year decline in price, despite the USD44 per tonne fuel hike at the beginning of the month.

Meanwhile, the price of jet fuel in India continues to fall. India’s state-owned fuel companies, Indian Oil Corp, Bharat Petroleum Corp and Hindustan Petroleum Corp, announced another 2.4% reduction in fuel prices on 16-Oct-2009, due to the strengthening of Indian rupee against the US dollar.

Oil prices have moved from below USD70 per barrel to above USD75 per barrel over the past week. For the week to 14-Oct-2009, the underlying crude oil price rose 8.0%, topping the previous week’s 6.2% surge. 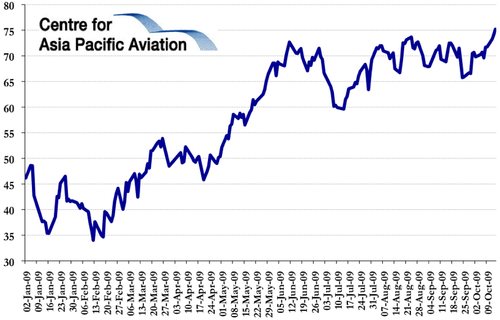 Prices were up USD10-15 cents per barrel across the markets. With the increases, fuel prices are now only 10-20% below where they were this time last year.