Engine Lease Finance Corporation, President and CEO, Jon Sharp, has suggested that oil prices will be the final driver of whether Airbus and Boeing decide to launch re-engining programmes for their existing narrowbody platforms.

Manufacturers, airlines, leasing companies and MRO providers have a large amount of intellectual and financial capital invested in the existing powerplants. Any decision to adopt new engine technology for the A320 and B737NG platforms must deliver enough benefits to ensure investing into new engines is worthwhile. The price of oil will weigh heavily on whether the new engines, which are promising double digit improvements in fuel burn, will bring enough to the table.

The new engines will “have to confidently deliver significant fuel savings while maintaining other aspects of cost ownership” according to the Engine Lease Finance Corporation CEO, speaking with CAPA this week. At the same time oil futures will “have to be on a steady upward trend” for this reinvestment to make financial sense. See related report: Engine leasing market reaches “equilibrium”; “frantic” selling over: Jon Sharp, ELFC

Southwest Airlines, the world’s largest B737 operator, has already stated that rising oil prices mean that retaining the current B737 is not an option for it. The company is already pushing Boeing for a clear timeline on B737 replacement.

Engine manufacturers are now on the cusp of introducing several new engines into the market. Pratt & Whitney’s PW1000G has already been selected to power the new Bombardier CSeries, Irkut MS-21 and Mitsubishi Regional Jet, while CFM International’s LEAP-X has been selected for the C919. The new engines are expected to be flying on the new airframes from as early as 2103.

Notably, Boeing and Airbus have yet to announce their competitive reactions to these new entrants, even if that reaction is to do nothing. Airbus and Boeing are currently studying whether they should fit these new engines to their existing narrowbody platforms, or wait until more technology matures and develop all-new aircraft. Airbus stated earlier this year that it does not see a new narrowbody emerging until 2025, or later.

Airbus has already deferred a decision on fitting new engines to its A320 to the end of the year. Boeing is taking a wait-and-see approach. Any project to adapt the A320 or B737NG families to new engines would require billions in investment, but significantly less than the development of an all-new airframe and engine combination. Both the A320 and the B737NG are still selling briskly, and both manufacturers have recently announcing plans to increase production.

Over the past two months, oil prices have steadily traded in a band of USD72-USD78 per barrel. Better economic data and increasing business confidence has helped push oil prices to near USD80 per barrel this week. While the IMF and The Conference Board have warned of slowing growth prospects in the second half of the year, the prospect of a ‘double dip’ recession has eased.

US oil inventories also declined by 5.1 million barrels, almost twice the market estimate, helping prices on US markets this week. Wednesday saw a WTI high of above USD77 per barrel, before it retreated slightly. Oil supplies are still at a five-year high. 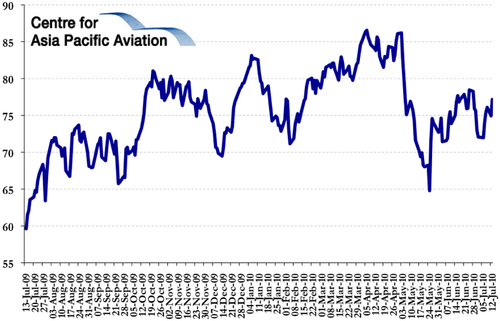 With the increase in crude prices, jet fuel prices also increased. Singapore prices rose to USD 200.6 cents per gallon, up 2.9% for the week. Swings in other markets were more pronounced. New York Harbour prices rose 8.5%, while Gulf Coast prices were up 7.8% and Los Angeles rose 5.9%. Amsterdam exchange prices rose 5.7%. 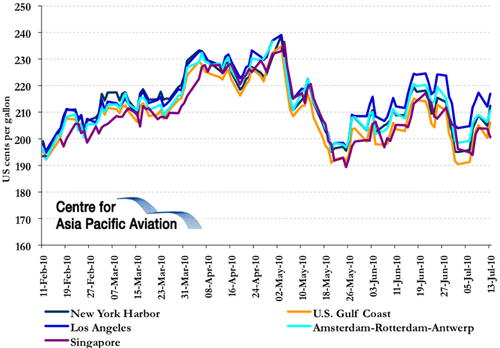