Oil and overcapacity, the two risks for 2010?

IATA’s Managing Director and CEO, Giovanni Bisignani, believes oil and excess-capacity are two of the most pressing challenges for the airline industry in 2010. Airlines are due to take delivery of approximately 1,400 new aircraft this year (almost 1,000 from Airbus and Boeing alone) and will have to find the routes to deploy them and passengers to fill them. Continued liberalisation of aviation access and economic recovery are therefore important drivers).

Higher oil prices and too many seats

IATA forecasts oil prices will average USD79 per barrel this year, up USD17 per barrel from last year. Even so, IATA moved recently to halve its 2010 industry loss forecast to USD2.8 billion, on the strength of a better traffic outlook.

Excess capacity is at least a more predictable challenge for carriers, given that delivery schedules are firmed up months, or even years, in advance. But oil remains the “wild card”, according to IATA, with volatility in the market sending oil prices yo-yoing by as much as USD10 per barrel over the course of a trading week.

OPEC President (and Ecuadorean Oil Minister), Germanico Pinto, stated this week that “acute and excessive price speculation” is determining prices. He told Business Week, “prices are driven by something totally unrelated to supply and demand” and it “essential that the price is justified by market fundamentals". Earlier this month, he promised to attempt to reduce price speculation and volatility during his term as the leader of the cartel.

Airlines, heavily susceptible to the vagaries of oil prices, even with hedging, clearly agree. In Nov-2009, US Airways President Scott Kirby stated he is “nervous all the time about what could happen to oil.” Southwest Airlines CFO, Laura Wright, stated last year that the volatility, even in long-term contracts, cannot be easily rationalised.

USD80 per barrel oil back again

Oil prices finished the week to 23-Mar-2010 essentially stable at USD81.68 per barrel, although it peaked at nearly USD83 per barrel earlier in the week. 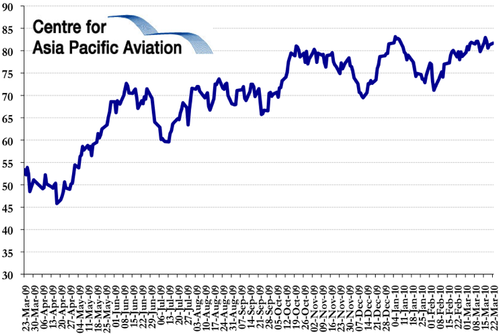 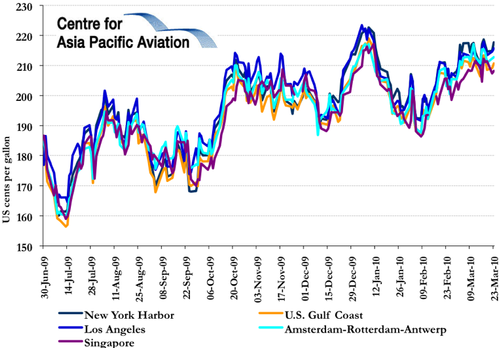