Shares in Norwegian Air Shuttle slipped 2.0% yesterday (but have advanced 26% so far in 2010), as Finnair CEO, Mika Vehvilaeinen, stated the carrier is seeking a codeshare agreement with Norwegian Air Shuttle, as part of efforts to increase passenger numbers on its nine international services to Asia, and to gain market share from the struggling SAS Group.

Commenting on the proposed agreement, Mr Vehvilaeinen, in an interview by Bloomberg, confirmed “we are discussing different forms of cooperation with Norwegian Air Shuttle, including the possibility to feed into our Asian traffic. It sometimes makes sense for other people to fly into our ‘waves’ into Asia”.

Finnair is currently Norwegian Air’s third-largest shareholder with a 4.8% stake. The Norwegian LCC plans to increase capacity by 30% in 2010, predominantly on routes between Norway, Denmark, and Sweden. The LCC added that it is planning its own long-haul operations from 2011.

The carrier’s CCO, Daniel Skjeldam, commented, “we have an interest in strategic cooperation. Finnair has been very good at developing a solid long-haul hub in Helsinki and that, combined with our inter-Scandinavian network, could be an interesting set up”. He added that “Norwegian Air will be one of the beneficiaries of consolidation in the Scandinavian market. We are very well positioned for the growth that can come in the Nordic region”.

In other European LCC news, Turkey's Anadolujet stated it plans to add six aircraft to its fleet by the end of 2010, to support an anticipated increase in passenger numbers from 2.0 million in 2009 to 4.5 million in 2010. This is expected to increase further, to 6.5 million in 2011. The carrier, which currently serves 27 domestic and two international destinations with a fleet of 12 aircraft, expects to launch services to ten new international destinations before the end of 2010. 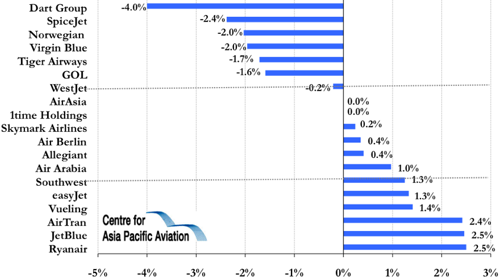