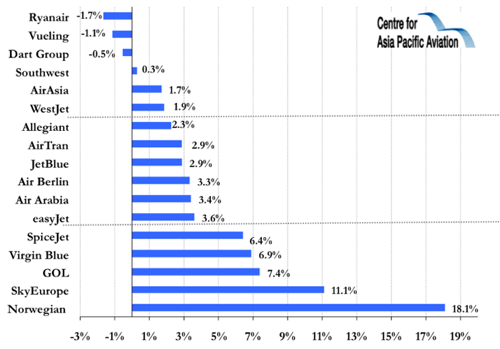 Norwegian's jump came as the carrier reported higher-than-expected second-quarter net profit of EUR20.0 million (compared to a EUR9.6 million loss in 2Q08), the highest 2Q results in the company’s history, as the rapidly expanding carrier boosted its market share, maintained its unit revenue and yields and improved its unit cost base. Revenues gained 23% to EUR211.1 milllion. According to CEO, Bjoern Kjos, "during a situation when the sector faces large economic challenges we have delivered our best quarterly result ever. As we are managing to maintain costs, we are earning across our entire route network." Norwegian’s share price has increased sharply since listing in 2003 and has also jumped noticeably so far in Jul-2009. 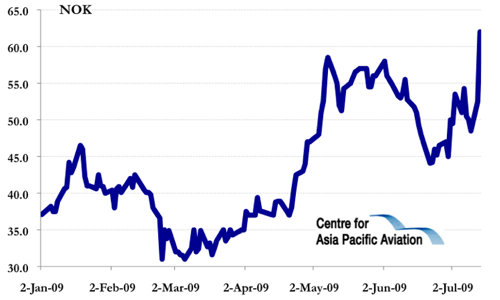 Shares in bankruptcy-protected Eastern European LCC, SkyEurope, also gained yesterday, up 11.1%, on news at the carrier’s AGM that the carrier had reduced its capital by nearly 85%, “for the purpose of adjusting the capital figures to the actual level of the company’s assets reflected by the share price”. The company is currently restructuring and seeking new investors.

In South America, GOL shares rose strongly on Tuesday, gaining 7.4%, despite the Brazilian market falling to a two-month low. The gain for the LCC, and its major competitor, TAM, occurred as Brazil’s Civil Aviation Agency reported strong Brazilian traffic figures for Jun-2009, with a 7.5% increase for the month, the largest increase since Sep-2009. The Bank of America also boosted GOL’s shares to “buy” , adding that the LCC has room to “materially improve margins”. Merrill Lynch also upgraded the LCC’s stock from ‘underperform’ to ‘buy’, citing the appreciation of the Real to the USD.

In the Asia Pacific region, AirAsia shares gained 1.7% yesterday. However, since then, the LCC announced plans to defer the delivery of eight A320 aircraft for 2010, a move expected to reduce the carrier’s gearing level. The carrier is also considering deferring a further eight deliveries in 2011. According to CEO, Tony Fernandes, “we are not delaying the deliveries because of cashflow, we need the planes for our operations but there is an infrastructure risk out there that we cannot afford to take”. While the move represents a notable change in strategy for the LCC and could suggest that the outlook for the carrier is tougher than initially anticipated, the decision could equally alleviate market concerns that the carrier’s aggressive expansion plan would be too risky in the weak demand environment.