flybe and Air France announced details of a new commercial partnership from autumn 2010, with the carriers adding the partnership will lead to a codeshare agreement from the end of Oct-2010.

Under the agreement, Air France customers will have access to 45 new routes between France and the UK and 17 routes on flybe's domestic network via Birmingham, Manchester and Southampton, while flybe will codeshare on 25 Air France routes.

Meanwhile, Monarch Airlines stated its route network is “performing well under what remain very tough market conditions". The carrier reported a 1.6% increase in passenger numbers in Jun-2010 to slightly under 414,000, with an average load factor of 86.1% (+2.9 ppts year-on-year).

Norwegian Air Shuttle's shares slipped 3.7% yesterday as the carrier reported a EUR12 million operating loss and a EUR17 million net loss in the three months to Jun-2010 (2Q2010), compared with profits in 2Q2009. The move into unprofitability occurred despite a 7% increase in revenues (to EUR256 million) and a 15% increase in passenger numbers (to 3.2 million) in the quarter and as yields and unit revenues slumped 15% and 18%, respectively. See related report: Scandinavia’s largest LCC, Norwegian Air Shuttle, slips into the red in 2Q2010 as yields decline 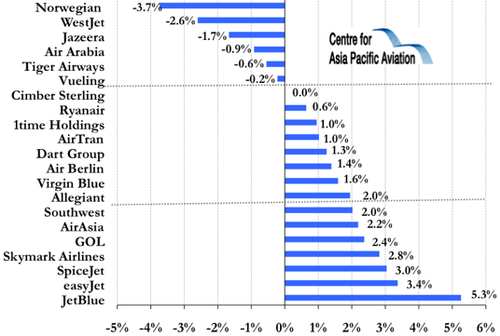