Oslo-based Norwegian Air Shuttle suffered its first reduction in yields in 12 months in Jun-2009, while its passenger growth rates and load factors have also slowed. In Jun-2009, Norwegian’s total passenger numbers rose 15% to 976,836, while passenger load factor eased 1 ppt to 79%.

In contrast, Air Berlin reported another strong increase in yield last month, as the benefits of its network restructure continue to pay off. However, these positive traffic results were not reflected in the carrier’s share price yesterday, which slipped 1.8%.

In the Americas, GOL's share price slipped 3.7%, as Brazilian stock prices fell for the fifth consecutive session, as the Brazilian currency weakened amid global unease in world equities markets. The carrier also stated it has been negatively affected by the swine flu, with load factors on services to Argentina plunging 50%, potentially forcing the carrier to eliminate some of its 14 daily services to the country. WestJet, AirTran and Allegiant shares were also down, by 2.6%, 2.2% and 0.9%, respectively, while JetBlue and Southwest shares both gained 2.0%.

Meanwhile, The IMF, in an update of its World Economic Outlook, stated economic growth during 2009-10 is now projected to be about ½ ppts higher than previously reported. Among the major economies, growth rates have been marked up mainly for the US and Japan. According to IMF Chief Economist, Olivier Blanchard, “the good news is that the forces pulling the economy down are decreasing in intensity. The bad news is that the forces pulling the economy up are still weak. The balance is slowly shifting, and this leads us to predict that, while the world economy is still in recession, the recovery is coming. But it is likely to be a weak recovery”.

In the Asia Pacific region, AirAsia’s shares gained 0.9%, while Virgin Blue shares slipped 1.7%. Virgin Blue and Delta have announced plans to seek regulatory approval to form a JV that will "expand both carriers' reach between the US and Australia and the South Pacific". In advance of the JV, the carriers are moving forward to implement codesharing, frequent flyer programme reciprocity and lounge exchange privileges. 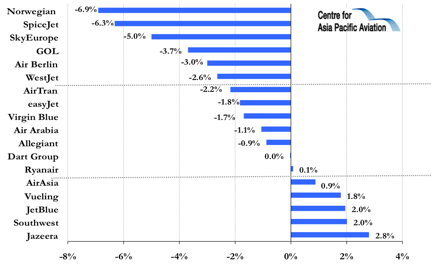