The carrier added that approximately 40% of the RASK reduction reflects the carrier’s adjusted route portfolio (stage length increased 5% in the month) and the introduction of 11 new higher-capacity and lower-unit cost B737-800 aircraft since Aug-2009. Meanwhile, passenger numbers gained 28% to 1.3 million with load factors declining 2 ppts to 79%.

Meanwhile, Danish LCC, Cimber Sterling (+1.2%), reported a 11% yield increase in Jul-2010 to EUR 11.28 cents, with a 5% RASK increase to EUR 8.46 cents, with the carrier commenting that the yield increase was achieved through “much better pricing” than in Jul-2009, and adding that the figure “clearly shows that the summer of last year was a start-up phase, primarily for leisure traffic, for which pricing was not optimal”.

Air Berlin shares gained 1.2% yesterday, upon the release of the carrier’s traffic results for Aug-2010, with the carrier reporting a 8.7% increase in passenger numbers to 3.7 million (including those travelling on the newly acquired NIKI and TUIfly routes), while load factors declined 0.8 ppts to 83.5%. The carrier, which previously reported monthly RASK figures, has not revealed this data in recent months.

Meanwhile, there has been speculation that Air Berlin is one of the potential takeover candidates for British Airways.

Ryanair CEO states no aircraft on the market worth buying

In other European LCC news, Ryanair CEO, Michael O’Leary, stated he believes there is no aircraft on the market worth acquiring but added the carrier still has options for 200 Boeing aircraft and up to 300 further aircraft from either Boeing or Airbus if it does decide to further expand its fleet.

Mr O’Leary also commented that Ryanair would consider paying another dividend by the end of 2013 if it is still generating the same cash levels and does not purchase any new aircraft. The carrier plans to pay a EUR500 million dividend in Oct-2010. Shares in the carrier slipped 0.9% yesterday. 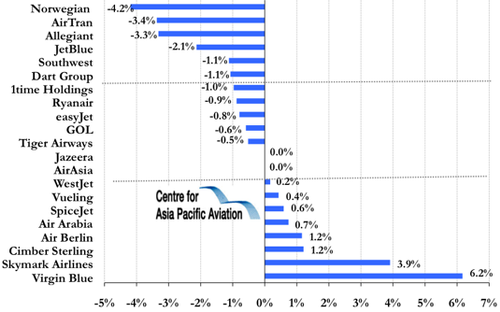