Norwegian is continuing to capitalise on the weakness of its rivals, the troubled SAS and loss-making Finnair, with plans to increase capacity (ASKs) by 15% in 2009. However, Norwegian, like its Nordic counterparts, is seeing worsening yield weakness as it enters the European Winter. 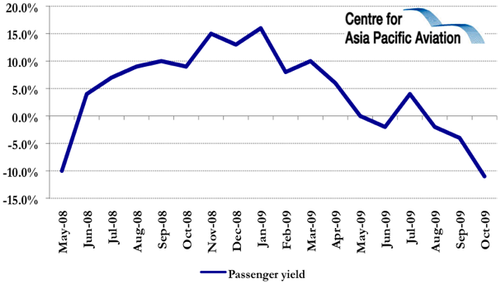 Oct-2009’s year-on-year yield reduction marks only the fourth month of yield contractions at the carrier since Jun-2008, and is related to the removal of fuel surcharges that covered last year’s record high fuel prices.

The yield contraction also comes off a strong base, with yield growth of 10% in Oct-2008.  However, this does mark the first two-year yield reduction for the Nordic LCC.

Unit revenues also down by double-digits

The carrier’s unit revenue were also down by double digits, to NOK0.49 (EUR 5.85 cents) in the month, for the largest monthly year-on-year contraction since the carrier commenced reporting monthly unit revenue data in Apr-2009. 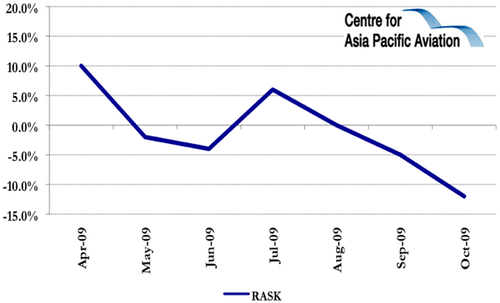 Norwegian, which reported a net profit of EUR45 million in 3Q2009 and an operating profit of EUR57 million (-10% and +146%, respectively), has shown that it is the best-positioned Scandinavian carrier in the current global economic recession.

Two years ago, Norwegian Air Shuttle was a quarter the size of SAS Group. The carrier has since grown to become slightly less than half the size of its larger, yet struggling, competitor.

Norwegian continues to grow at the expense of its network competitors

Also in Oct-2009, Norwegian reported a 25% year-on-year increase in passenger numbers to slightly over 1 million passengers, with load factors slipping slightly, down 1 ppts to 78%, as the carrier’s 20% traffic (RPKs) gained slightly exceeded its 19% capacity (ASKs) increase.

While Norwegian has had the strongest load factor among its Nordic counterparts in every month of 2009 except Jan-2009, it relinquished this position to Finnair in Oct-2009. 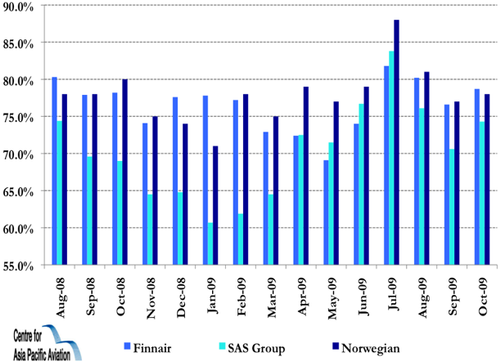 The increase in passenger traffic, capacity and passengers is related to the carrier’s expansion in established markets and to the introduction of new routes from Nov-2008 to Oct-2009, as well as adjustments in production capacity.

This strategy has made Norwegian the only Nordic carrier to experienced passenger growth this year, with the LCC’s 25% passenger growth in Oct-2009 that largest monthly passenger increase in over 12 months for the carrier. 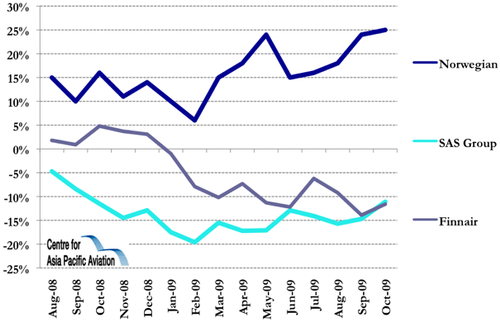 Norwegian has increasingly shifted capacity toward new routes in Norway’s domestic market, and has opened a new base in Copenhagen (the carrier’s average sector length decreased by 4% year-on-year, accordingly), as it attempts to take further market share, especially in the business segment, away from its struggling Scandinavian network carrier competitors, who are continuing to cut back capacity.

SAS Group, meanwhile, continues to suffer, with Scandinavian Airlines, upon the release of its Oct-2009 traffic highlights, reporting an 9.4% yield contraction in Sep-2009, the second largest yield contraction for the carrier’s after a 11.7% reduction in Apr-2009 (although this was negatively effected by Easter falling in April in 2009, compared to March in 2008). 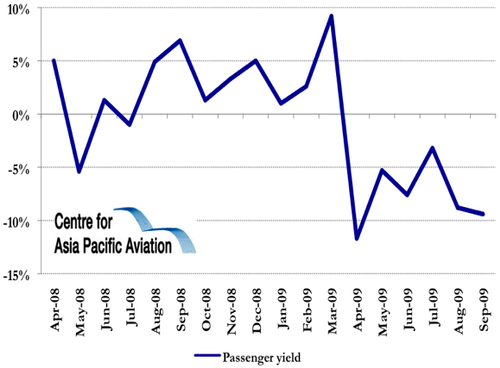 Yield down across the SAS Group in 3Q2009

And unfortunately, Scandinavian Airlines expects the yield reduction trend to continue in Oct-2009, with the carrier stated it expects change in yield in Sep-2009 to be “negative indicating continued yield pressure going forward”, with this development to have a “significant negative impact regarding the full year result”.

Scandinavian Airlines added that “the market continues to be unpredictable and the uncertainty regarding the timing of the recovery is considerable”.

Total Group passenger traffic was down 11.1% in Oct-2009 (to 2.2 million), with only Widerøe within the group (ie SAS Scandinavian Airlines, Widerøe or Blue1) reportedly a slightly year-on-year increase in passenger numbers.

During the month, the carrier reduced capacity across its network as follows:

Finnair expects Winter to be “tough”; but cargo traffic declines “appears to be over”

Finnair (which this week announced the appointment of Mika Vehviläinen as the carrier's new President and CEO effective 01-Feb-2010) is also experiencing challenges, with Finnair SVP Communications, Christer Haglund, stating that “for leisure traffic in particular, the coming Winter season will be tough”.

In Sep-2009, the carrier experienced a 11.6% reduction in total passenger numbers on a 12.9% capacity (ASKs) reduction, with cargo volumes up 4.8% (after contraction of 1.0% and 11.5%, respectively, in the previous two months) prompting the carrier to state that “the decline in cargo traffic, however, currently appears to be over”.

Norwegian, SAS and Finnair are all preparing for an expected tough Winter ahead, with Norwegian, the best placed of the Nordic carriers, conceding that it expects a slowdown in the business environment throughout the remainder of 2009, which will maintain pressure on earnings.

Finnair supported this statement, stating, upon the release of its 3Q2009 financial reports, that while there are signs that the decline in travel demand is ending, overcapacity “will not allow significant or wide-ranging increases in prices” and a pickup in business travel will require “a clear change in global economic conditions”.