Norwegian back in the black in Q2, tops up B787 order

Norwegian Air Shuttle, Europe’s third-largest LCC, reported a NOK53.7 million (USD9.6 million) net profit in the second quarter, reversing a NOK134.4 million loss from the same period in 2010. The Oslo-based LCC reiterated its plans to launch long-haul services with a top up for its order for Boeing 787s.

Despite the improved second quarter result, it wasn’t strong enough to carry the airline into the black for the six months to 30-Jun. Norwegian reported a NOK239.5 million (USD43 million) net loss for the first half, owing to a heavy loss in the first quarter. For the first half, revenue increased 27.3% to NOK4.6 billion and operating expenses increased 28.5% to NOK4.5 billion. Unit revenue was up 2% to NOK0.40 and unit costs, including fuel, increased 1% to NOK0.49. Ex-fuel, unit costs fell 4% to NOK0.35, bring it close to its NOK0.30 ex-fuel unit cost target.

In the second quarter, Norwegian improved performance across a range of key metrics, including revenue, expenses, passenger numbers, yields and load factors. The LCC’s net income of NOK53.7 million is good for a 2.0% net margin.

Second quarter revenue increased 34% to NOK2.7 billion, which outpaced the growth 26% growth passenger numbers, as unit revenue increased 9% to NOK0.43 and yields increased 5% to NOK0.55. Domestic revenues were up 28% and international revenues up 38%. Norwegian attributed the improved unit revenues to higher loads and an adjusted route portfolio. The improved result also reflects the ash cloud-induced closure of European airspace from Apr-2010.

Ticket revenues contributed 87% of the operating revenue, with ancillary revenues 11.3%. Ancillary revenue per passenger were flat at NOK76.4. Norwegian plans in increase the share of revenue attributable to ancillary streams to 15%.

Norwegian continues to grow at breakneck pace and has been on a diet of double-digit growth for the past two years. Growth rates at Norwegian remain much higher than those at its larger rivals Ryanair and easyJet, although they are off a much lower base. The LCC handled 4.04 million passengers in the three months to 30-Jun (about half what Ryanair will carry in its peak summer month and about the same volume as easyJet’s monthly average), a 26% year-on-year increase. 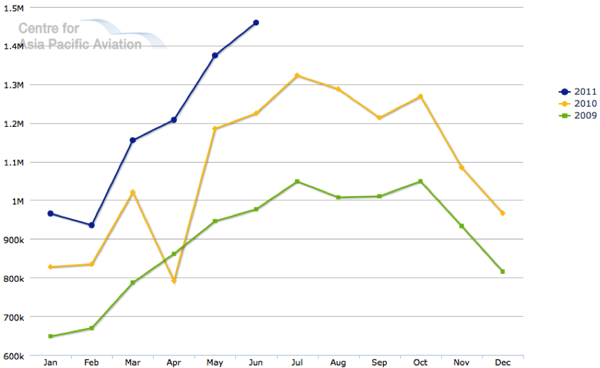 ASKs in the period increased 24% and RPKs were up 29%, bolstering load factors 3ppts to 78%. The higher loads results in improved yields and unit revenues, although yields still have some way to go until they recover to the higher seen in 2009. 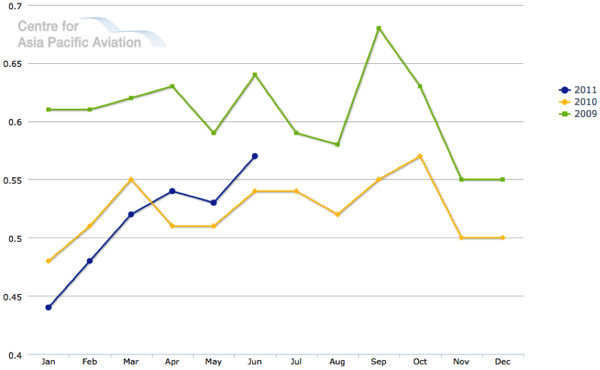 The share of Internet sales was 84 %, which is a decrease of 4ppts due to increased sales through travel agents, a strategy the LCC is employing to tap into the business travel market. 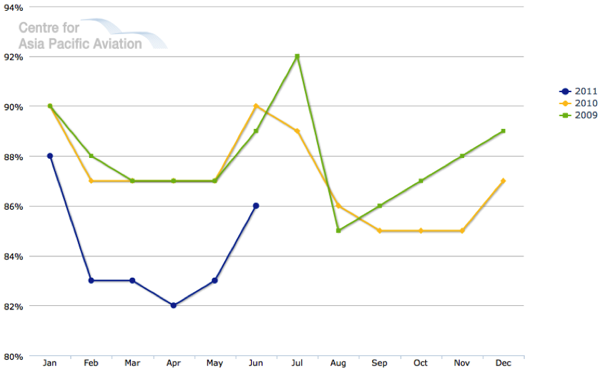 Expenses up across the board, but unit costs down

Operating costs were also up sharply in the second quarter. Unit costs, however, which reflects the airline’s expansion, fell 6% to NOK0.32 ex-fuel, demonstrating the hard work the Norwegian has been doing on the cost side. Including fuel, which jumped 48% in the period, unit costs were stable at NOK0.47.Costs increased 26% to NOK2.38 billion, led by a 48% surge in the fuel expenses to NOK809 million. The sharp rise in fuel prices was partially offset by its ongoing fleet modernization and increased sector lengths. Unit costs for fuel increased 19%. 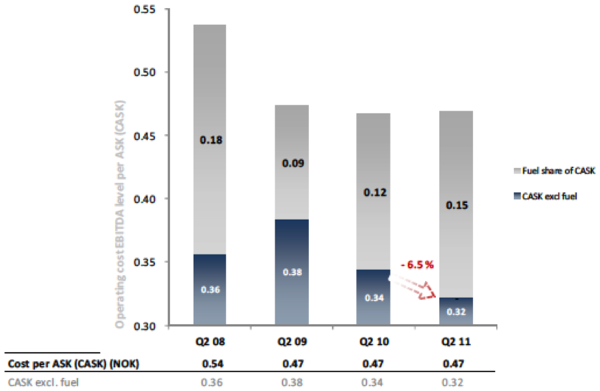 Elsewhere, personnel expenses increased 22% to NOK452 million on growth in headcount. Staff unit costs were down 2%, which was a result of a productivity increase due to Norwegian’s increased Boeing 737-800 fleet. The larger -800s offers more capacity per aircraft and thereby puts downward pressure on crew cost per unit. Airport and ATC charges increased 21% to NOK397 million. Units costs for this expense fell 3% due to the increased share of the larger B737-800s.

Norwegian aims to lower ex-fuel costs to NOK0.30 (USD0.05). The LCC hopes to realize this by converting to a single-type fleet, which will be more efficient (Norwegian claims the operating costs of its B737-800s are lower than its older B737-300s, giving it an additional 38 “free” seats per sector). Outsourcing and offshoring opportunities will continue to be pursued aggressively, allowing the LCC to avoid the high costs of Scandinavia. Aircraft block hours will be increased, stage lengths will be optimized and the airline is rolling out self check-in and bag drop initiatives.

Cash flow from operations fell slightly to NOK275 million, cash flows from investing activities was –NOK756 million, due to aircraft deliveries, pre-delivery payment and sale and leasebacks, and cash on hand at the end of the period fell 23% to NOK1.2 billion. In line with the lower cash from commercial activities, interest-bearing liabilities increased 15% to NOK2.9 billion.

The LCC confirmed it has entered into a Letter of Intent to lease a further new B787-8s from ILFC to be delivered in early 2014, bringing the total number of such aircraft on order to six. This is the third B787-8 to be leased from ILFC. The six aircraft are part of Norwegian’s plans set up long-haul operations. Negotiations for further aircraft will continue, the LCC said. The airline expects to have one B787-8 in service by the end of 2012, growing to five B787s by 2015.

Entering the seasonally-strong summer quarter, Norwegian CEO Bjørn Kjos stated that bookings has been “satisfactory”, with the new Helsinki base performing in line with expectations (it handled 260,000 passengers in the quarter), the installation of WiFi is proceeding as planned. Capacity will be increased due to the use of larger aircraft with a lower cost level, which the LCC says will allow lowers fares and higher passenger volumes. The airline expects to grow ASKs by 25% in the third quarter, which will occur mainly in Finland and Sweden, and in Norway for charter operations.

Norwegian warned of the uncertain business climate that has continued to plague Europe this year. Continued yield pressure is another major concern for the airline, as overcapacity has been a problem and competition heats up across Scandinavia. Norwegian, however, is the best-positioned airline in the region to benefit from strengthening demand for travel and with its lower cost base it will be able to compete aggressively against Scandinavia’s much higher-cost incumbents.